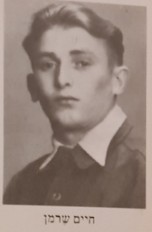 Chaim Szerman was raised in a religious family with many children. His father had a small textile store from which he eked out a meager living. Owing to his scholarliness and breadth of Torah learning he was much esteemed by others. One of Chaim’s brothers was a teacher, while his two older sisters emigrated with their husbands to Brazil. At the outbreak of the war, Chaim was thirteen years old. In October 1942, his family was sent to Treblinka. He himself was sent to Auschwitz at a later date. While being transferred to another camp, he succeeded in escaping together with a friend. At first, they hid by a Polish farmer. After he snitched on them to the police, they fled and wandered about until they found another farmer, living outside the village, who agreed to employ them on his farm. He also obtained for them forged documents. After the war Chaim returned to Ostrowiec, but unable to find any of his family, he traveled to Kielce and joined the “kibbutz.”

Chaim was a quiet and introverted lad who continued with us to Italy without taking an active part in the life of the group. He would only break a smile when particularly moved, such as after our harrowing journey from Bratislava to Budapest 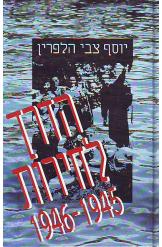