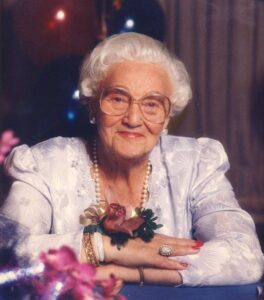 Source and Excerpts from article Holocaust Survivor Kept Gloriously Upbeat and Warm Despite Hardships, written by RON CSILLAG -THE GLOBE AND MAIL  -APRIL 4, 2014

Chana Szpilman was born on April 12, 1907, in Ostrowiec, the seventh of eight children in a family known for their music skills. Her father, Ruben Shpilman, was a well-known musician.  At age 18, Chana married a fellow musician, Jankiel Lustig. Their first son Yisrael Leib was born two years later.  Their second son Uris died of pneumonia a couple weeks after his birth.

Chana’s father and two sisters were deported along with most of the Ostrowiec Jews in October 1942. From 1942 to 1944, Chana worked as slave labor in the ghetto until she and her husband were sent to Auschwitz in 1944. She was later in Bergen-Belsen and was finally liberated in April 1945. Soon after, she discovered that both her husband and son also survived.

On March 19, 1945, Jankiel and Yisrael were in Faiga Krongold’s apartment during the attack by ex-soldiers of the "AK" - Polish Home Army. Yisrael was killed in the attack and Jankiel was wounded.  Chana and Jankiel left Ostrowiec and went to the Furstenfeldbruck camp for displaced persons.  There, Jankiel died from heart failure, probably due to a broken heart.

"If a Holocaust survivor can embody such an incredible sense of positivity, maintain her faith in God and choose to believe in the goodness in people, then I believe we should all be capable of an optimistic outlook," said Brian Shifman, Mrs. Wallace's grand-nephew.