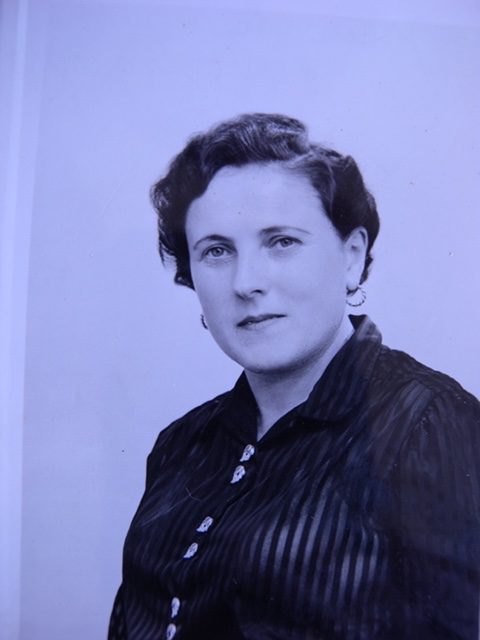 As related by her grandaughter, Maya Trinquart:

My Grandmother was born in 1922 under the name Chaya Rosenberg, the daughter of  Shimon Rosenberg.  Her father had a Mill in town of Ostrowiec.

Chaya had 10 brothers & sisters - we have few of the names:

Arch' ארצ'ה - (He died before the war - we don't know how) - but my father was name after this brother,

Miriam - (Went to Argentina before the war)

We know they had twin sisters too - which we don't have the names,

And more siblings - totaling of 11.

Chaya got papers - her father/family arranged them, as she spoke Polish very well & had a "Polish look."  She survived working as Polish christian in the camps, under the name Helena Prykowska.  (She kept this name for the rest of her life.)

She meet her husband in the camp and after the war, she married him and went with him to France.  My father was born 1947 in France.  A few years later she reunited with her brother is Argentina and move to Argentina at 1958.

Below is an article that my grandmother wrote.

In a German Forced Labor Camp as a Christian

by Helena Pirkawska (Chaya Rosenberg From the Mill)

My name is Chaya Rosenberg. My parents' names were Shimon and Dina.  We had a flour mill at 18 Mlynska Street, Ostrowiec, Poland.

When the war broke out and that cruel and bitter day was determined that all Jews were to die, I was issued my Aryan papers under the name Helena Pirkawska. With these Aryan documents, I often left the ghetto, and I was able to buy bread for my family, as well as for other poor Jews who were in the ghetto.

One day before they sent the Jews out of the city, I wandered around as an Aryan and for 15 days I wandered without knowing what to do with myself. I traveled from one city to another city without any clear purpose. Until one day the Gestapo caught me in the cellar, and I was sent to a forced labor camp in Germany.

When I got to Germany, we were sent to stay at the Brandenburg school, and the next day everyone was assigned a different kind of work. I had to sew new trousers. To my great joy, I met a Jewish girl from Lodz there. We worked 10 hours a day under the tight supervision of the SS.

Shortly thereafter, we were all taken from the camp and sent to a tank factory. In this factory, we worked 12 hour shifts, night or day. In this camp,  6,000 foreigners from all nationalities worked. Every nation was in an isolated compound surrounded by barbed wire. There were also many prisoners of war. Our salvation was to eat 100 grams of bread and a pint of watery soup per day.

You can imagine how great my fear was, a Jewish child who might be found among so many gentiles. I was very scared that I would speak a word of Yiddish while sleeping, and then SS would appear immediately.

When we were back from work broken and crushed, the gentiles used to "bark" at the Jews.  It was a hard and terrible task for the Jews to stay alive. I suffered both physically and morally. I did not know what my future held, and I did not believe that there would be an end to this suffering.

On May 8, 1945, we were liberated by the Russians. They took us out of the camp and we settled with their entire army. They planned to send us to work in Siberia. Later, they assigned us to a French transport, and so I arrived in France. I suffered greatly because I did not know the language, and everything was foreign to me.

I lived in France for many years and then moved to Argentina. In all the countries where I traveled, I didn't feel any warmth. More and more, I felt that my precious home was gone forever.

Today I live In Israel with my son, who came to volunteer to our country. He's a military man and this is my greatest compensation for the hardest things I've been through in my life.