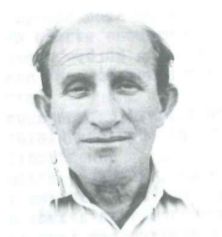 Excerpted from translated eulogies by Shneur Razin and his nephew Avraham Rosenman, along with research* done by Avi Borenstein

Born in 1895, Eliezer Levi grew up in Ostrowiec in an ultra-Orthodox Hasidic family.

After his mother died of illness at an early age, Eliezer began to leave his family’s Hassidic way of life and began the Zionist-public period of his life. He established a public library in Ostrowiec. He encouraged the young Jewish people of the town to learn self-defense because there had been many disturbances in the town. He was in contact with the Zionist leader of Polish Jewry, Yitzhak Gruenbaum. Eliezer headed the Zionist Histadrut of Ostrowiec and had to often defend the antisemitic claims against the Jews of being Bolsheviks.

Eliezer was an accountant and a business correspondence writer. As a young man he was busy with his father's business as a wholesale flour merchant, traveling frequently to Warsaw,

After World War I was over and Eliezer was in his 20s, he decided to immigrate to Israel despite his father's disapproval. Eliezer immigrated to Israel in 1923, changing his last name from Levi to Halevi. Arriving in Petah Tikva, he began working in building and orchards. He joined the Zionist pioneer camp in the Jezreel Valley and reached Kibbutz Geva in1928.

Eliezer took Zionism very seriously in Israel. He joined the radical “Al Hamishmar” group of Zionists that prioritized aliya of halutzim (pioneers) to work in agriculture.

Eliezer brought his brothers and sisters to Israel. His father even immigrated to Israel at the end of his life and was buried on the Mount of Olives. Eliezer brought his sister to Kibbutz Geva along with her one-year-old son Gideon. Gideon grew up there, got married and unfortunately lost his life in the Yom Kippur War.

His brother Yechiel Levi immigrated to Israel and grew up in Kibbutz Ginegar.

Eliezer, although never married, was not alone. Eliezer was one of the accountants in Geva and many learned from him. He was interested in every occupation and work. He especially enjoyed doing good deeds without the expectation of receiving a reward. He enjoyed spending time with the youth of the kibbutz.

Eliezer was a man devoted to his ideals- Judaism, socialist Zionism, and love of the Bible and Talmud. He passed away in 1985.