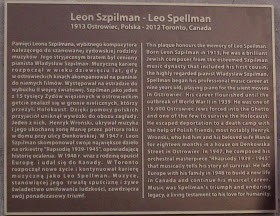 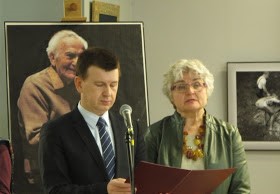 President of Ostrowiec, President Jarosław Górczyński, speaks at the Honorary Citizenship ceremony for Leo Spellman, with Hania Fedorowicz, translator of Szpilman's memoirs from 1943-45.

Excerpt from an article by Monika Pastuszko, published originally at blogwbudowie.blogspot.com, in Polish

"To secure his life, Szpilman is temporarily forced to leave Ostrowiec." - Honorary citizenship for Leo Spellman

On 1 February 2016, Leo Spellman, a pianist and composer from Ostrowiec, became the honorary citizen of Ostrowiec. He is the eighth honorary citizen of Ostrowiec. The City Council voted unanimously for granting this title to Spellman. At the ceremony were the Spellman family, a film crew working on a film about the life of a musician, a translator working on the translation of his journals from 1943-45 (from Polish to English). There were also relatives of Henryk Wroński - a Ostrowiec citizen who saved Leon Szpilman.

This is another commemoration of the Jewish history of Ostrowiec within a few months (after the monument commemorating the victims of the Holocaust in Ostrowiec). Knowledge of the history of our region or the local community brings many benefits. First of all, it is a great tool for building a dialogue, identity and a sense of belonging of residents to a given locality - said President Ostrowiec Jarosław Górczyński at the ceremony.