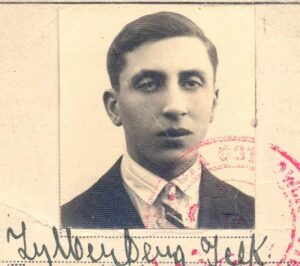 Icek Zylberberg was born on May 1, 1910 in Ostrowiec, to Herz Mordka and Poria (Zysman) Zylberberg. He served in the Polish Military Service as a qualified non-commissioned officer of artillery (1936). In 1938, he returned to his home town of Ostrowiec, where he married Ita Klos. By then, Ita's mother had already sent several of her children to South America, using dowry money to buy tickets, legalize documents and obtain visas. Similarly, at the end of 1938, Icek and Ita travelled to Arica, Chile, passing through Bolivia. Their eldest daughter was born there but later died due to poor sanitary conditions. The family travelled to Buenos Aires (Argentina) on several occasions so that their children could be born there in better conditions. In 1955, they moved with their three children Paula, Juana and Marcos to live in Arica, and years later to Santiago. Icek’s family in Poland was transferred to the Lodz ghetto, where his mother died. His father, sister, cousins ​​and uncles were all deported and killed.  Icek passed away on Feb 22, 2007.