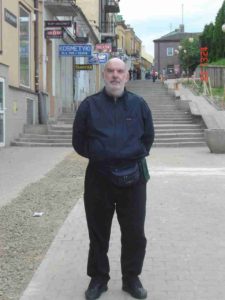 Impressions of a Journey to Poland and Israel – May 2006

Introduction- Israel Blajberg lives in Rio, Brazil and is son of Abram and Berla (Langer) Blajberg  who emigrated from Ostrowiec in 1929. His family page can be seen here.

How many Brazilians would have ever heard of Ostrowiec?  Two hours far from Warsaw we found a Polish mini-Volta Redonda (a city in Brazil known for its huge steelworks), a town with has so much contributed to Brazil.

Ostrowiec was once a Jewish town.  Ninety per cent of its residents were Jews, among them a certain family who, from time immemorial, came from a place called Bleiberg, in Austria, where there was a lead (blei in German) mine.

During our excursion to Poland there was a day free when groups would be formed to visit their places of origin, toured by a bilingual guide.  Some were tired and gave up.  I had the feeling that I would not make going to Ostrowiec before my return to Brazil.

While the main group remained resting in the Hotel Bastok, very close to the old synagogue, today the Municipal Archives of Sztarachowicza, a nice medieval town, I managed to hire Stefan to take me on his taxi to Ostrowiec, even though our communication was rather difficult.  That was my salvation.

Waldemar Brociek, from the History and Archeology Museum, was already waiting for me.  The Museum is located in a mansion having served in the past the Ostrowiec steel plant director.  Many Jews worked in the plant then and even today it is possible to have an idea of how important to the town the plant was.  There are countless chimneys, many of them still standing, although its present owner, a Spanish group, has wound up its activities, as a consequence of globalization, since it has become cheaper to make steel elsewhere. 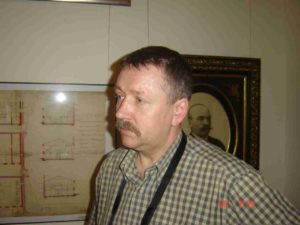 Just like in Volta Redonda, the whole life moved around the steel plant.  There were good housing buildings for the workers, as well as a rather big hospital, in which many doctors were Jews.

In order to make our conversation easier, Waldemar called in at the last minute Alicja, the director of the English course in Ostrowiec.  She kindly left aside her daily routine to follow us along this unforgettable day.

In the museum rooms a rich collection of Ostrowiecian Judaism is displayed. I identify at once a kind of well known candlestick, similar to that one which we keep on using until now for Seder.

Going through the rooms, we hear low background music.  The Polonaise Militaire, of the brilliant Chopin, is being played.  It immortalizes a longing for freedom for his invaded motherland, a shared feeling among the Jews, as testified by an appeal of the sacred Rabbi Mayer Chil for them to vote for the Great Marshal Pilsudski, for he would do the Jews good…The name Mayer was then given to so many children born there, his spirit invoked to solve multiple tzures (problems), from infertility to unemployment, to find a groom or a bride or even to heal someone hopelessly sick.  Rabbi Mayer Chill fastened for many years, he was like a saint for the simple people of Ostrowiec.  In Rio de Janeiro, a great neurologist bears his name, given by Ostrowiecian parents. 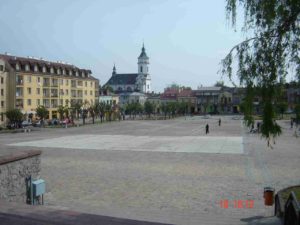 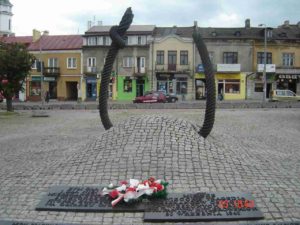 I could stay for days, weeks in the museum, but I have just a few hours.  We go soon to the Rynek.  Waldemar prepared a CD for me with old photos in which an overcrowded Rynek is seen, plenty of people wearing traditional Jewish garments, although nowadays it is only an enormous empty square crossed by few people, like we three, the same wide area surrounded by side by side two-storied houses to which carts would be drawn in daybreak, full of fresh vegetables, eggs and produce of all kinds to be carefully picked up by customers.

On the other hand of the square there is a monument.  This was the place where some brave Ostrowiecian partisans were hanged.  A thick steel rope ending up in a knot wavers upwards.  Those lives have not been lost in vain.

This is a very quiet town.  Few people on the streets, light traffic.  A river separates town from steel plant and many housing blocks can be seen at a distance.  It is easy to identify those from the Soviet era: uglier and rather depressing…

I recall an address mentioned by my cousin Marcelo, from Buenos Aires.  Rynek 53.  His grandfather had a jewelry store there.  It is easy to find the building, just on the corner.  Another jewelry store stands there, on the same place.  I cannot resist buying some pieces made of the famous Polish amber.

By the time the Jews were there, Ostrowiec was relatively small.   There was the business center and the steel plant far away.  In the center everything was close and possible to be reached on foot: the Rynek;  the synagogue by the river with its mikveh and Beit haMidrash, destroyed by the Nazis; the Rembichevski mill with its waterwheel; the cemetery that still remains; the Narrow Street, with its stairways, where the Niskier family lived, close to St. Nicholas Church, where our guide got married, and 13, Ilzestja Street, where the Blajbergs lived. 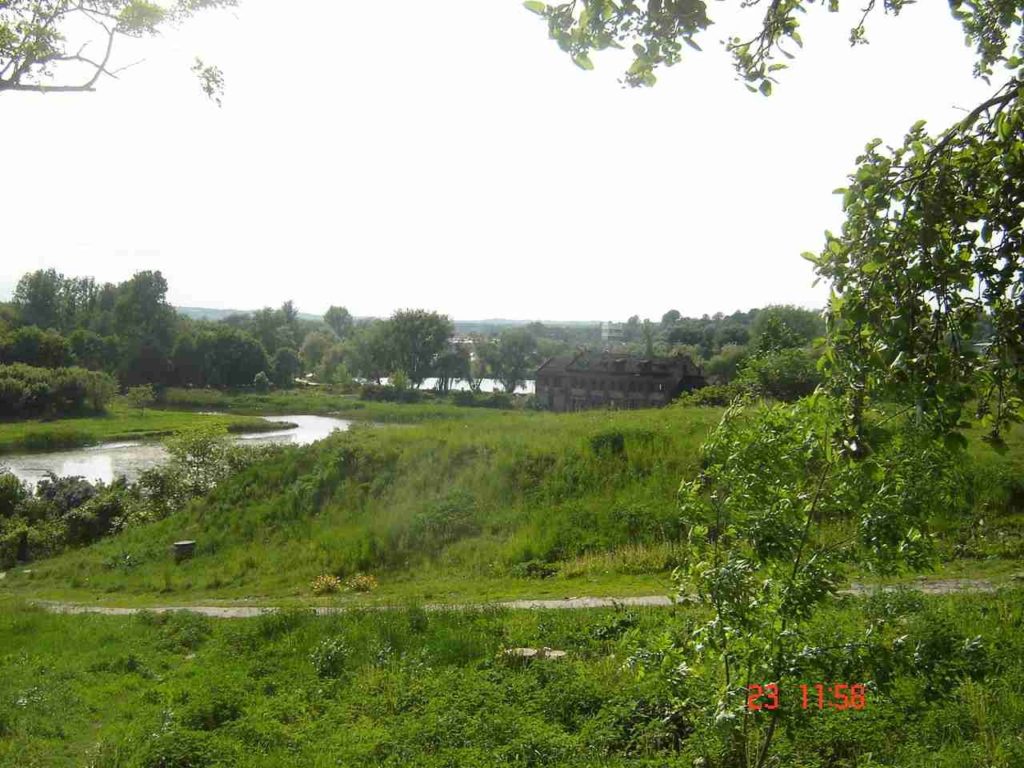 Place where the synagogue once stood

The name of this street means the way to Ilza.  Some 10 or 12 kilometers farther it is possible to reach Ilza, such a small shtetale that is nowhere in the map, the place of residence of the Langier family, to which my mother Perla belonged.  It was said to be so small that when the coach arrived from Radom, the horses had already departed…

Though separated by only one street, by a stroke of fate my parents had never met in Poland, but did it in Brazil, after Cherbourg and Uberlândia…

We walked through all this, Alicja always translating rich information from Waldemar, co-author of the book “Zidszi Ostrowiecki” (Jews of Ostrowiec), with Adam Pencalla (already dead) and Regina Renz, Rector of the Jagelonian University, in Krakow.

Sometimes I stop asking and try to go mentally 64 years back.

We are in April 1942.  The Nazis rounded up all remaining Jews, those who had escaped executions and abuse.  Szlama Blajberg leaves his house, and marches on with his wife Hana, his daughter and grandchildren.  Taking only their clothes on, they get on railway cattle wagons unaware of their final destiny: the gas chambers in Treblinka, not too far from here.

I make an effort to assess what that suffering could have been but find no paradigm.  It is too much for a Brazilian.  It was an immense loss.

Five children had then already left for salvation: one in Brazil (who in time would be my father Abram), three in Palestine and one in Trinidad and Tobago, where he would spend all war time and then leave for San Diego.  My grandfather Szlama paid a friend to hide her daughter Lola, who, after the war, went to Israel.  If that brave Pole would have been caught, death would be his punishment.  Years later he visited Aunt Lola in Israel. I shall make an effort to propose his nomination as a Righteous Among the Nations in a challenge against distance, language and implacably running time.

We halted for a while to take a coffee.  A Polish girl passes carrying a green-yellow bag with an inscription: Brazil.

At this very moment, a thought comes to my mind: that in spite of all our sorrow, we have been victors. Sixty-four years later, a Brazilian has come to this long-suffering land where his grandparents fell prisoners to find out that we won, though at the cost of a very high price for this victory.  Today, the children of the Nazis bring in their soul a taint left by their parents, that of an unpayable debt.  Whereas ours bear the sign of the unpolluted and faithful priestly caste, the Levites.

We make for the City Hall, only one block from the number 53, where Jankiel Mintz once lived and worked together with forty more people crowded in a two-storied small building.  I am welcomed by two very blonde, almost white, ladies: the Deputy Mayor, the Head of the Mayor’s Office and the City Secretary of Education.  It is a meeting as strange as natural.  We exchanged gifts and set forth the ideas of some future projects: a school contest for students writing on Jewish-Polish subjects; improvements in the cemetery that is almost abandoned, and maybe, a football match between a Brazilian team and the home club KSZO (correctly pronounced kshó), which plays the Second League and owns a nice and modern stadium.  Only future will say if these are mere dreams.

The officers look surprised to hear that among the descendants of Ostrowiecian Jews there are famed politicians and even an important minister, well-known intellectuals, a president of the Brazilian Academy of Literature, famous physicians, engineers, members of Parliament, PhDs from the best universities and celebrated fellows of the cream of the Jewish Brazilian intelligentsia.  People whose parents and grandparents toiled in the ice-covered Rynek and in the surrounding jewelry stores, tailor shops and groceries.  Strange and difficult to pronounce family names refer today to VIPs and celebrities in Rio de Janeiro and São Paulo.  With artists, psychologists, poets, builders, businessmen, politicians, writers, painters, antique dealers, doctors, that is how the Ostrowiecian Jewish DNA has fertilized Brazil’s sunny tropical land.

So, the Rynek lacks another monument beside that of the steel rope…Maybe this one should be here, on Brazilian soil, maybe even at a Jewish institution.

Just like the Polish artist of the Rynek, one of ours will certainly have a similar sensibility to exhibit on metal or concrete the sentiment of victory over the Nazi storm that tore away the Jewish roots from that suffering land and unwittingly brought them to Brazil.   Here these roots have grown, expanded and bloomed into so many fruits, abundant and sweet like in their motherland.  In my opinion it is not too much to assume that the contribution of Ostrowiec to Brazil in human capital may be comparable to that made to Poland itself…

I am amazed at Waldemar’s deep knowledge of Judaism.  Unfortunately, I cannot read his book in Polish.

The day is coming to a close.  Once there was a Society of Jews from Ostrowiec in Rio de Janeiro, at the Jewish Square XI (destroyed by urban renovation in the forties).  It is said that a fire consumed all its files and records.  Very little Jews of those born in Ostrowiec are still alive, as well as very little of their offspring seem interested in this rich history.  Many do not know that their forefathers came from there; others are not even attached to Judaism anymore.

In Ostrowiec itself very little, but very little indeed, are those who, like Waldemar, recall, study and record the flourishing Jewish life of the town up to 1942.

When someone looks at places from a distance with a time perspective, this May 2006 becomes rather emblematic, for one century ago a fantastic connection began to be drawn…

My father used to recall that on the wall of the living room at his house in Ostrowiec, there hung a family tree picture, topped by the MAHARAM, a sainted rabbi that had lived centuries ago, our ancestor, a guru of endless kindness and large wisdom.

Our people were forcibly driven throughout the world.  We never managed to know the MAHARAM’s face, neither to know exactly who he was.  We are only sure, however, that he accompanies and protect us from heaven with his blessings.

He does not want the Jews of Ostrowiec to be forgotten and using the tools of the Kabbalah, which he so profoundly studied, he provides for fortunate coincidences to happen: helpful taxi drivers, museum experts that write books, English speaking school directors…