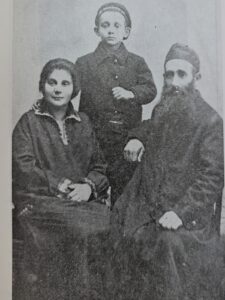 Born in 1876 in Ostrowiec, Jacob Hertsig directed the Loving Kindness Loan Society along with his wife Ester–Rokhl from Lodz, an institution in itself.

Every shabes in the morning after services you could see Yokale with his helpers going from house to house with big baskets and calling out, “A gut shabes Yidn! Help your poor brothers and sisters!” The baskets were quickly filled by kind–hearted housewives, with shabes braided breads that were later distributed among the needy families in a discreet manner, in order not to shame them.

Visiting the sick was Yokale's second activity. He and his friends would sit whole nights long with the sick when their housemates were too tired from continually caring for them. The group also borrowed various sanitary and medical supplies for free, for the sick who were not in a position to pay.

Yokale Hertsig fell as a martyr during the deportation from Ostrovtse: he came out into the street wearing his talis un tfilin and the German murderers shot him that way.

Excerpted from Streets and People in Ostrovtse by Shmuel Shtraytman, Ostrowiec Yizkor book, 1971