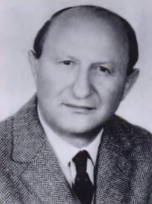 From 1935, he lived in Sosnowiec Poland, where he did business in the glass industry. During the war, he visited his mother’s home in Ostrowiec and experienced the war in Ostrowiec and various labor camps and concentration camps including Auschwitz.

He was freed by the American army in May 1945 and later moved to Brazil at the end of 1946. He became an editor and journalist in various Yiddish and Jewish newspapers and radio programs in Rio De Janeiro and Sao Paulo. He died in May 1986.

Below is Konrad’s experience of his return to Ostrowiec after the war.  This excerpt is from his book

Nightmares: Memoirs of the Years of Horror Under Nazi Rule in Europe, 1939-1945

…. What I found was a brick two-story building which had belonged to my parents, and a whole courtyard area that stretched for three streets from my grandfather’s property. … My grandfather, Avraham Leibish Waxman, of blessed memory, was once a man of property. He once had an estate in Chmielev, near Ostrowiec, and a mill too. Since that time, he had a love of nature of his own fruit trees and fruit. Later, he bought the property in Ostrowiec, and the first thing he did was to have the garden planted. There, we used to enjoy our free time. Near the garden, my father built his house. We also had many Christian neighbours. We got along very well with them and used to play with their children.

One of our neighbours was called Leshkowitz. He was a livestock slaughterer who spoke a very good Yiddish which he learnt from his Jewish neighbours. When I went to see what happened to my inheritance, I happened to chance upon this Leshkowitz on Shener Street. He immediately recognized me and greeted me with these words:

My heart received a blow and tears started to stream from my eyes.

A neighbour and a so-called friend of so many years, whom my grandfather had helped a lot, and with whom we had lived as a good neighbour; someone who knew what a large family we were, which embraced around 200 people, upon seeing that one of them was alive, instead of welcoming him in a friendly manner, and inviting him into his home to honour him with a drink, regrets instead that I did, in fact, survive.

He could not stand to see me. Nothing prepared me for such brutality. I merely answered him:

"Yes, you see with your own eyes that I'm still alive and will probably outlive many of my enemies."

I wiped my eyes and went to see my former home. I met another neighbour living in my mother's house, also a livestock slaughterer. He received me in his kitchen, not allowing me into the salon, but through an opening in the door I saw our green sofa and the large, massive sideboard. I also saw our drapes and our other things on the balcony. On the other side of the premises, on the balcony, near the kitchen, was our glassed-in porch. Here stood containers, probably with cabbage, and sacks of potatoes. I was dying to go into the room that served as my writing room. That was where I had once written my poems and stories, sitting during winter evenings near the stove, but he did not open the door.

Not waiting until I would ask him something, he finished with me, saying that he had been given the premises by the magistrate, and that he must not deal with me at all in this regard, but that I have to direct my inquiries to the officials. He eyed me with a pair of murderous eyes, shoving me towards the door.

I went out, feeling as though someone had poured a pail of cold water on me. He immediately locked the door behind me, as though he was afraid that I might return. I went away from there embittered, disappointed, and a wreck.

My grandfather's houses were also taken away, and even the garden was destroyed. Even the acacia tree, which I loved so much, and from which I would remove branches each year for our succah, was chopped down. No sign of it remained. I felt physically and mentally crushed, insulted and spat upon.

It was only then that I understood our great tragedy and destruction, that it was not only the Germans, the Nazis, who destroyed and rooted us out, but also the other nations who helped them actively such as the Poles, Lithuanians, Ukrainians, Russians, Hungarians, Rumanians and others who helped them actively and participated in the murders; and also those who stood by and watched indifferently, closed their borders, and in no way helped the defenseless people in their desperate situation.

I wandered around in the city like a madman, a lost soul, and could not stop crying. I was physically and mentally broken. I looked into many Jewish homes and stores where, at one time, I met so many friends and acquaintances, precious faces and friendly looks, but I no longer meet there any of the former owners. I look into the yards, and scenes of the Jewish children who once played there flash before my eyes, the Shloimelech, and Peselechs, the Hershelech and Dvorelech, but they have disappeared. I remind myself of the long caravans and transports, the executions, the gas chambers and crematoriums where I met them when they were being led to their death. The Nazis and their partners thought up thousands of ways of death for their victims. Their houses, their residences and their stores were taken over by strangers who took possession of the whole Jewish fortune, the sweat and toil of generations. They stole it all, and now they parade around in the clothing of the Jews, Jewish underwear, Jewish jewelry, everything the Jews owned. Whenever one of the victims of those they helped murder and liquidate, but whose fate was to survive and live, reappeared, they consider him an enemy, an intruder, an evil spirit who has come to disturb their peace. They are ready to kill him, just as happened to so many victims.

I walk along this way in pain and with swollen eyes which absorb the whole Jewish tragedy, and the unceasing Jewish sorrow, until I come to the place where once stood the old Jewish synagogue and the study houses, but here I find a grassy hill and brush. The grand old synagogue, built in the 16th century, no longer exists. It was one of the most original and noteworthy architectural synagogues. It was a wooden structure, with a round cupola on top of the roof. …..

That very same day, I went away from my home city, Ostrowiec, broken-hearted and crushed physically and mentally. I slid along the walls like a thief, ashamed to look at the houses, the trees and the streets, which still remember me from those fortunate times when I used to stroll hopefully and happily, full of fantasies and dreams. I believed in the world in those days. I believed in humanity, and hoped for a better tomorrow when people and nations will live in mutual understanding, helping one another to build a more beautiful, better and more just world; …..

Unfortunately, all these hopes and dreams were torn asunder. I ran away from the city of my dreams disappointed and bitter, downtrodden and in pain, insulted and spat upon, because my eyes have seen so much of blood and tears, so much brutality and murder, so much despoilment and vileness. I left, never to return. I left for a new world, to a new continent, and to new unknown surprises in life.

This excerpt is based on text found on Concordia University website from the translation of the Yiddish "Koshmarn" by Miriam Dashkin Beckerman.  More details on the life of Konrad Charmatz can be found in English here.

A digital version of original book in Yiddish is available here.

Nightmares: Memoirs of the Years of Horror Under Nazi Rule in Europe, 1939-1945 is available at Amazon.