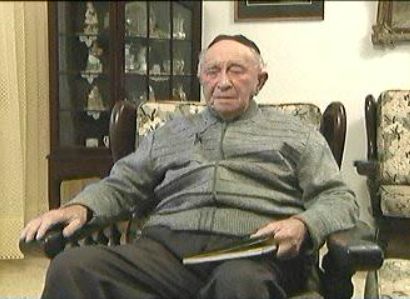 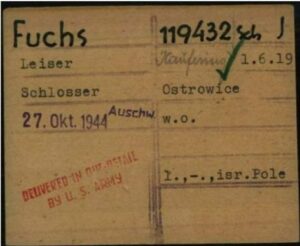 Leiser/Eliezer Fuchs was born in  Ostrowiec  in 1909  son of  Malka/ Dobrish (daughter of Meir Kastenberg )and his father Moshe Asher who owned a shop trading iron and building materials.

Moshe Asher and Malka  had seven children and Eliezer was the sixth son , who married Rodel (daughter of Lipa Canal from the city of Będzin) . Leiser and Rodel had a daughter named Kraindel Hana who was sent with her mother to Treblinka.

During the war, Leiser worked in a labor camp at the Hermann Goering factories until the ghetto was liquidated in August 1943 and was sent to Auschwitz when he was shot in the face. He was released from the Dachau camp in 1945.

After the war, Leiser  married Regina in Lodz and they both immigrated to Israel and divorced in 1952. Eliezer married Sarah Rosenberg, a Holocaust survivor, a widow with two daughters: Bracha and Hanna.

Sarah was one of the first settlers of Gedrot settlements. The couple made a living from farming and three children were born: Moshe, Yossi and Mali Malka.

Eliezer's brothers who lived in Ostrowiec and were sent to their death:

His nephew Leo, wrote a poem/testimony about the Deportation of the Ostrowiec Jews in 1942. 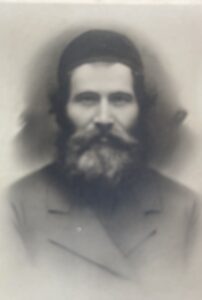