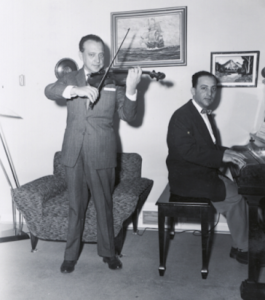 Leo played with municipal orchestras and traveled with dance bands to tourist resorts in southern Poland. When German armies occupied Poland, Spellman returned to Ostrowiec, where he helped establish the ghetto orchestra. His musical gifts drew the attention of a guard, who lightened Spellman's workload in exchange for accordion lessons. The guard later helped him and his wife escape to the nearby forests.

At the end of the war, the couple emerged from hiding. They later spent some time in Ostrowiec, but after being wounded in the murderous attack on March 19, 1945, they left the town and eventually arrived at a displaced persons camp near Munich. While employed there as a pianist, Leo composed his “Rhapsody 1939-1945”, which premiered at the camp in 1947.

In 1948, Leo moved to Canada and worked steadily in Toronto as a composer, concert pianist, cantorial accompanist, and music director of the Toronto Jewish Theater. In the late 1990’s in his garage, he found the work that he had written half a century earlier.  He dusted it off and took it to Washington, where it had its North American premiere at a conference in January 2000. Leo passed away on Nov 24, 2012.

Interview with Leo Spellman and introduction to the Lost Rhapsody

Full performance of the Lost Rhaspody

Article from The Globe and Mail

Excerpt from an article by Monika Pastuszko

Szpilman's Warsaw: The History behind The Pianist