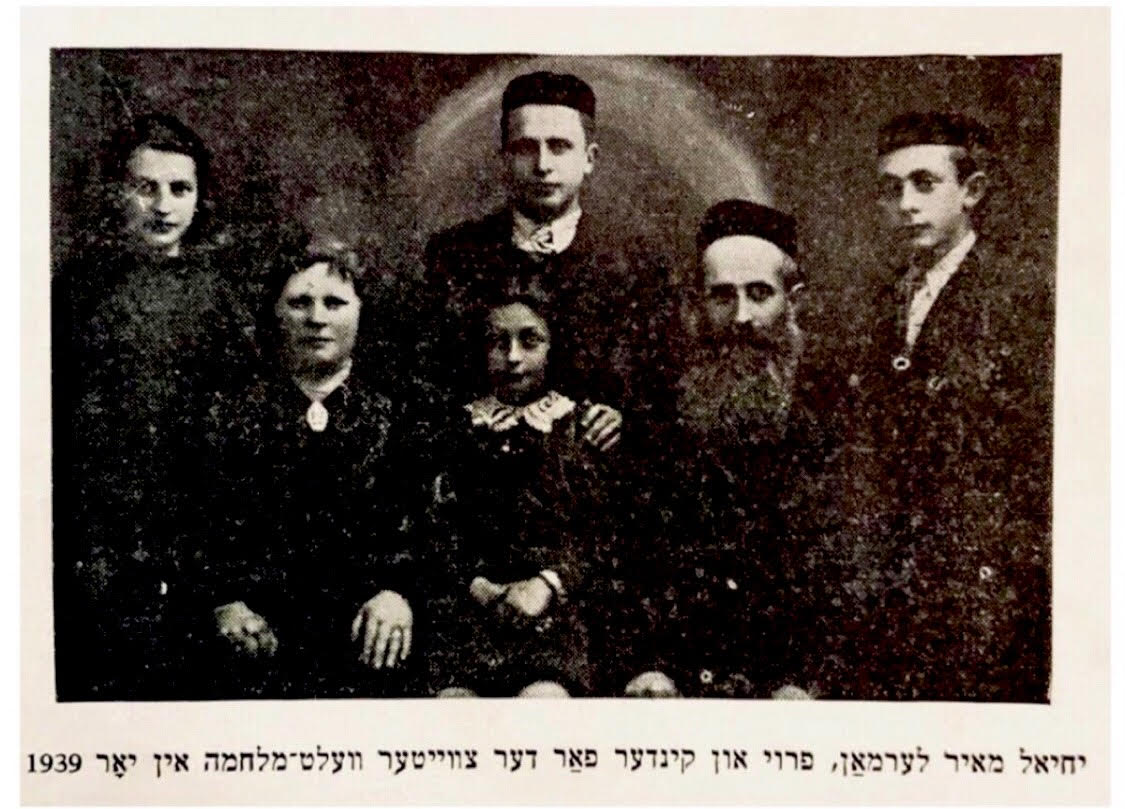 Levi Lerman was born in Ostrowiec on May 25, 1925, to a religious Jewish family made up of his father Yekhiel Meyer Lerman, his mother Rywka Kestenberg Lerman, and his siblings Yitzhak, Hendel and Aidel.  His family lived in a house at Rynek 22, opposite the market square where the fairs where the Jews traded were held on Mondays and Thursdays.  His father was a merchant and had a haberdashery on Okolna 2, right around the corner.

Levi led a Jewish life with Jewish studies until his childhood was interrupted on September 1, 1939, when Germany invaded Poland.  Levi was 14 years old, and his life, from that day, changed forever.

On January 1, 1942, all Jews were forced to live inside the Ostrowiec ghetto and do forced labor in German factories.  His father got him a job letter for forced labor at Zaklady, the steel factory, at 17 years old.

His mother and his brothers were deported to the Treblinka death camp in the ghetto liquidation action of October 10, 1942.  His grandmother Malka Klajman, his uncles, and his cousins ​​were also deported.  They were all cruelly murdered.

Levi and his father were deported in June 1944 to the Auschwitz-Birkenau concentration and extermination camp where they were marked with a number on their arms.  They were then transferred to Buna-Monowitz.

At the beginning of 1945, Levi and his father suffered the death march from the Buna-Monowitz camp to the Gleiwitz concentration camp, a 72 km march in 48 hours without stopping, in conditions of extreme cold, hunger and physical exhaustion.  Afterwards, they both passed through the Mauthausen and Dora-Mittelbau camps where they were forced to do slave labor.  They finally ended up in Bergen Belsen where they were released on April 15, 1945, by the British brigade.  They were then transferred to the refugee camp in Celle where Levi married Lea Richter.

At long last, Shlomo Lerman, Yekhiel Meyer's brother, who had escaped anti-Semitism to Argentina before the war, managed to bring both his brother and Levi to Buenos Aires on September 3, 1947.  They had to wait two long years due to the restrictions against Jewish immigration that existed in Argentina. Levi was 22 years old when he arrived in Argentina to finally start a new life with his wife.  In Argentina, Levi (known there as Leon) and Lea (known as Lola) had two daughters.