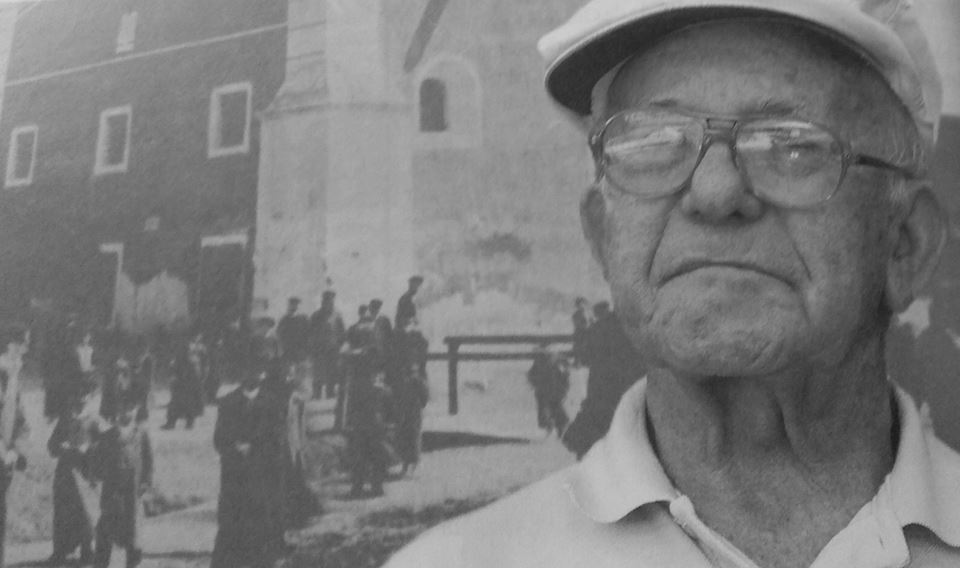 As a posthumous tribute, we are reposting the following interview from 8 years ago. Mario Lustgarten died in Barranquilla, on February 10, 2018 z "l.

He is a restless, small figure, fast walking and wearing a mandatory cap that makes him unmistakable. He is everyone's friend. The one who cannot miss in the daily minyan in the synagogue, or in the domino table on Sunday mornings in the club; He who knows the stories of the whole world, narrated with the unmistakable accent that he keeps in spite of time; and the one that everyone recognizes, respectfully, as one of the last survivors of the Holocaust that resides in our city, Barranquilla.

When I ask how he survived the Holocaust, he answers immediately and without hesitation: "In the concentration camp one learns to be alive, awake. I saved myself because I am quick to make friends." This is Mario Lustgarten, a valued member of the Jewish community of Barranquilla. His parents [Ephraim and Ethel (Borenstein) Lustgarten] called him Moniek or Moses. But when he arrived in Colombia, his cousin, Natalio Lustgarten, gave him the name Mario, more Hispanic.

Better known as Shorty, Mario was born in Ostrowiec, Poland, on December 12, 1927. On the night of the sixth Chanukah candle that year, to be more precise. He was the fifth of seven children, four men and three women. Mario and his brother Ariel, who also lives in Barranquilla, are the only ones who were saved from Nazi barbarism.

"My family was religious. My grandfather had his beard down to here, he says pointing to his waist. We lived in a two-story house. My brothers and I covered the table in the living room with a sheet and we put together a theater. We mounted small productions. I had a talent for singing. I sang in the choir of the Polish school. But we had nothing to do with the Poles, we did not have Polish friends. In the morning we went to school and in the afternoon to cheder. "

Mario recalls a series of experiences that marked him forever: his departure from Poland, his passage through Auschwitz and Bergen-Belsen, his transfer to England and, finally, his arrival in Barranquilla after his visit to Panama. The little expressiveness shown by his face and his fluid narrative, almost dispassionate, do not agree with the profoundly moving and emotional meaning of his words.

When Mario was 15 years old, he and his brother Ariel were separated from the rest of the family and taken to a labor camp on the outskirts of Swietokrzyski, an industrial city near Ostrowiec, where his family had moved years before the war, to make clothes for the leaders of the city, then uniforms for the officers of the Polish army and, finally, uniforms for the German army.

Towards the end of the war, when the prisoners of the camp knew that the allies were approaching, they realized the fate that awaited them and decided to escape. In the confusion, during the escape, Mario tripped, fell to the ground and could not escape. Ariel did manage to leave. This is how the brothers separated and did not hear from each other until after the war.

A few weeks later, upon realizing that they had lost the war, the Germans removed the remaining prisoners and transferred them to Auschwitz. They quarantined them and tattooed a number on their arm. Mario received the number A19392. "They divided us by sections. I slept near the gypsies. One night they ordered all the gypsies out. There was a terrible screaming and crying. No shots were heard. [The Nazis] did not spend on lead. But everyone already knew they were going to be killed. While the gypsies were there, there were noises, laughter, children playing. The next day everything was silent. "

After a few months, the few remaining prisoners in Auschwitz were forced to run in the infamous 'march of death'. The majority died. Making the way part on foot and part in railroad cars, the few that remained finally arrived in Germany.

After the war, the surviving Jews began to rebuild their lives. The first thing they did was to inquire about the fate of their family and friends, to find out who had managed to save themselves. "I was 11 or 12 years old when a letter arrived from an uncle of Colombia, written in Yiddish," recalls Mario. I looked at the address: Sastrería París, Colombia. I recorded that address in my head. After Auschwitz, when I arrived in Bergen-Belsen, at the Unicef ​​house, I asked myself: How does my uncle in Colombia know that someone in the family was alive? Then I saw a man with a long beard in the uniform of the English army on the street. It turned out to be a chaplain. I asked him: Di redt Yiddish? Do you speak Yiddish?" Thanks to this chaplain, Mario managed to get in touch with his relatives in Colombia and Israel and learn, in addition, that his brother Ariel was alive.

Overcoming many difficulties, Mario arrived in Lübeck, north of Germany, which was a Scottish area; he remembers that there he had seen soldiers with skirts. Then he arrived in Bergen-Belsen, where he stayed for a few weeks. It was there that through Unicef, Lord Moses Montefiore got an order from the English government to take the Jewish boys and girls, survivors of the Holocaust, up to 20 years of age, from Bergen-Belsen to England. Shorty, who was then 17 years old, arrived first at Southampton, and was later transferred to Ascot. "... They took us to a city near a German airport and there, after a day or two, a colonel from the Canadian Air Force gave us a card wishing us luck. They took us to 50 in [a] parachute plane and in two hours we flew over Paris. [In England] Lord Montefiore was waiting for us with a group of German Jewish doctors. These were the children who, years ago, left at Kindertransport. The press said that we were the first 50 surviving children. Martin Gilbert, in his book The Boys tells our story. I arrived in England in October 1945.

"I stayed like three years in Ascot and when my uncle wanted to take me to Colombia, I asked him to write to 'my owner', Lord Montefiore. The process to obtain the visa to Colombia was complicated by the struggles between liberals and conservatives in that country. I arrived [in Barranquilla] in November 1948 at the invitation of my uncles, Nathan and Natalio Lustgarten, who arrived in Santa Marta in 1928, enthusiastic about the story that 'gold coins were collected in the street'. It was the time of the United Fruit Company. All the immigrants from Poland of those years arrived in Santa Marta: the Schwartz -which are the grandparents of Kito, the director of this magazine-, the Schmulsons, the Kligman. My uncles founded the Slaconia garment factory.

"We arrived by boat from Liverpool to the American zone of Colón, in Panama; from Panama we had to fly in a Pan American clipper. But the Americans took our passports, from me and a Spaniard, in Colón. They had to watch us because we came from communist countries. We arrived on Saturday and had to wait until Monday. We did not have money for a hotel, and an officer took us to Balboa and we knew a little about Panama. "

Mario is thoughtful. Looking in the distance, he recalls his first impression of Barranquilla ... "What struck me the most, even though Europe had suffered the war, was that there was culture, order. I came from England where everything is orderly, there is health for everyone, that's Europe. In Barranquilla, to this day, I cannot get used to the disorder, backwardness, social injustice. I fix everything, I make friends with everyone. What I did not understand then, what I still cannot understand, was why those girls who worked in the factory, good people, workers, sometimes asked me to borrow money because the husbands did not give them for the milk of the children. I never liked that. "

Mario remembers with nostalgia the group of friends of his youth, members of the Jewish community of Barranquilla, many of whom are not among us today. They spoke Yiddish, played sports, went dancing and having fun. "I arrived [in Barranquilla] on a Monday and on Wednesday Natalio, my cousin, took me to the club. He told me: 'That's José Watnik who plays ping pong very well.' My cousin bet 50 pesos that I would beat him ... and I lost! "

"I learned here [in Barranquilla] that I could be friends with everyone. We went to the sea. We were young, athletes, and nothing bothered us. On Fridays and Saturdays, we went dance. The peltas liked to dance with me, I have a good ear. In England they liked it too. I dance tango, waltz, quickstep, buggy, all that. "

A sportsman since his childhood, Mario was the organizer of the soccer team Macabi Colombia. It was during one of the parties, in Galapa, where his nickname Shorty was born ... "You know how it is in Barranquilla. Everyone here has nicknames. On one occasion we were playing, and Jaime Watemberg, better known as 'Cachegua', wanted him to pass the ball and shouted: 'Shorty, pass me the ball'. And that's how it was."

I listen to Mario and I understand that I am facing an exceptional person. I have a deep respect for this simple and vulnerable human being who endured the indescribable without ever losing his dignity. Sentimental and idealistic, he still houses a dream of social justice, peace and tolerance. "I thought that after the war, the world would change. We must try that there is no hatred of race, that all people can live quietly, without fear. But from what I still read in the newspapers, I do not see how the world is going to be composed."

Article from El Heraldo upon Mario's passing (in Spanish)