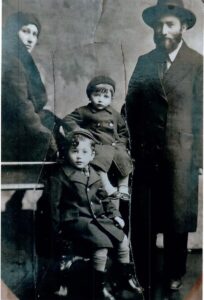 Symcha Bunim and Luba Maur, with their eldest sons Saul and Maurice, in Ireland circa 1922-3

My father's name was Symcha Bunem Maur and he lived in Ostrowiec until around 1932.  His parents and most of his family were from Ostrowiec, Poland.  My late mother was born and lived in a town not far away called Wierzbnik, Poland.  My father's father Alter Maur z”l died of natural causes during the early days of WW2 (circa 1942) and his mother died before that war.

In Polish the family name was spelled "Maurem," however as far as I know it was written as Maur, or Mauer.  My father was one of 9 siblings, 4 brothers and 4 sisters.  As far as I know 6 of my father's siblings and their offspring were murdered by the Nazis during the Shoah. One brother, Liebel or Louis emigrated before WW2 to the USA and eventually retired to Netanya Israel where he died.  Another brother, Henoch, also left Ostrowiec before the beginning of WW2.  According to rumor, he traveled to Palestine where he either enlisted in the British army and was killed in WW2 or fought in Palestine during the War of Independence and was killed. We have been unable to obtain information on him.

My father, in or around 1925 - 1926 when he was a young man of 21 (and already engaged to my mother), traveled with a group of 12 talmidim and 2 or 3 rebbes from Ostrowiec to Eretz Yisrael (Palestine at that time) to learn in the Yeshivat Sefat Emet in Mea Shearim that was just then established. After two years of learning in Eretz Yisrael he went back to Poland and married my mother on 12th July 1927. 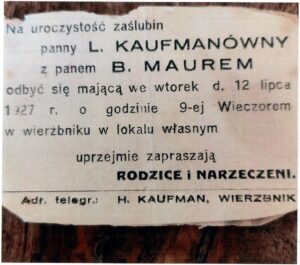 Wedding invitation/notice in Polish of my parents,
12 July 1927

At the request of my grandparents who foresaw horrible times for the Jews in Poland and Russia my father left Poland to England (where he had an uncle from his mother's side) at the age of around 28.  He sought to obtain a working position in England so that he could bring over my mother and their two small babies.  He ended up in Ireland where he succeeded in getting a work visa. He obtained a position (through Harav Herzog who was at that time the Chief Rabbi of Ireland) as a Reverend (ie, Shochet, Teacher in Cheder and Ba'al Tefila) to a small Jewish community in Waterford. After a few years there, he succeeded in moving to Dublin and eventually left the Rabbinate to go into business.

From the stories that I remember from my late father, his family were strong Gur Hassidim and when the Gurer Rebbe would come to visit Ostrowiec from Gur, he would stay at the house of my grandfather.

Both my parents made aliya to Israel, a few years after I came here in 1969 and lived in Jerusalem.  They are both buried in Har Ha'zeitim in the Gurer cemetery.