Mjetek/Moshe Bomberg was born in 1920 in Warsaw. In 1940, his family decided it would be safer to be in Ostrowiec, with his aunt’s family.

Mjetek worked in the steel factory, where he was severely injured and saved by his friend Isser Greber. He later was sent to the Auschwitz concentration camp. After the Soviets freed the camp, he was saved and he joined the Polish Security Service.

Mjetek managed to escape Poland and tried to make his way to Israel, but was sent to Cyprus where he met his wife, Sara. In January 1949, Mjetek and Sara came to Israel. At the end of that year, they had their first daughter whom they named Zehava, after his mother. Their son Yechezkel, named after Mjetek’s brother, was born 5 years later.

In Israel, Mjetek worked as a wrestling coach and referee.  He took part in the Munich Olympics, but by a miracle, wasn’t among the 11 of the Israeli team members that were murdered.

Anything But His Soul 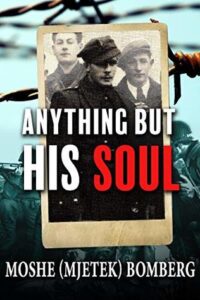 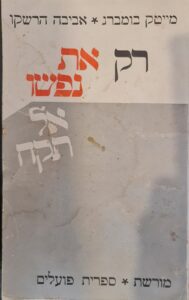