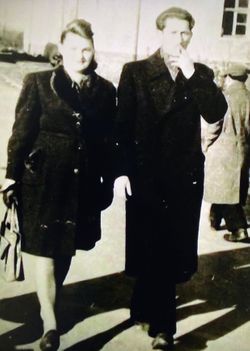 Morris/Moshe Meir Weinrib was born  in August 1920 in Ostrowiec.  His father Aharon Weinryb was born in 1883 in Gozdzielin,  a nearby village to Ostrowiec. His mother Chaja Sura Wajnryb (Cytrinbaum) was born in Ostrowiec. Both his parents were murdered in Treblinka in 1942.  His brother Izak/Icek was caught escaping from the Germans; he was tied to a horse and later shot to death.

Morris met his later-to-be wife Manya/Mary/Malka Rubinstein (who grew up in Wierzbnik) in the ghetto at Starachowice.  As teenagers, they were initially imprisoned at Auschwitz.  Morris bribed the guards to bring Manya shoes. After a period, Manya was transferred to Bergen-Belsen and Morris to Dachau.

When the war ended four years later, Morris searched for of Manya and found her at a Bergen-Belsen displaced persons camp. They married there and eventually emigrated to Canada.

Their son, Gary Lee was born in Toronto in 1953.  He is know best known as Geddy Lee, the lead vocalist, bassist, and keyboardist for the Canadian rock group Rush.

Rush rocker’s mom, an Auschwitz survivor, was his biggest fan