The most tragic event relating to the partisans of Ostrowiec was the murderous attack made by the Home Army Partisans against the newly joined Jewish Partisans from Ostrowiec in a forest near Kunów. Of the group of fourteen Jews from the Ostrowiec ghetto, twelve were murdered.

One of the survivors, Szlama Zweigman (Cwajman), gave a testimony to the Polish courts about the incident. (See page 7 of the article by Dariusz Libionka and Alina Skibińska for Zweigman's testimony.)

Zweigman’s testimony resulted in a trial and the indictment of Mularski and Nowak, who were sentenced to death. They were later pardoned and released from prison after 1956, as well as a third convict.

In the year 2000, the murderers even received compensation for their imprisonment. 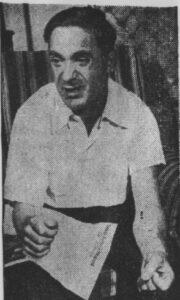 Articles about Szlama's arrival in the United States can be seen here and here.