Notation: Aharon Fridental gave a testimony on 16 February 1948 to the Regional Court in Warsaw. This testimony is not mentioned in the Yizkor book.

I know that Böttcher was the head of the Gestapo in the district of Radom. I lived in Ostrowiec Kielecki. I saw Böttcher on several occasions.

I remember that in April 1942, Böttcher headed a group of Gestapo men (Peter, Bruner, Wagner and others), carrying out the so-called “action” in Ostrowiec, during which they went from door to door, killing a hundred Jews. I didn’t see him then, because I was hiding, but my friend who did see him said that Böttcher was supervising the “action”.

In October 1942, transports of Jews departed from Ostrowiec to the camp in Treblinka. This time I saw Böttcher, who was in charge of this operation. I saw him standing at the main square, where about 15,000 Jews were assembled. He was shooting at them with a revolver. Several elegantly dressed women were standing next to him. Böttcher handed the revolver to one of them and taught her how to shoot Jews. The woman proceeded to shoot at the Jews who were gathered there. During this “action” the Germans killed about 1,500 Jews. 2,000 were sent to labour in the Ostrowiec and Starachowice works, and over 10,000 were sent to the death camp in Treblinka. I was in the group of Jews who were assigned to work. I was sent to the [illegible] camp in the Ostrowiec Works.

Böttcher visited this camp together with Franz Jäger, Zwiercina [?], and other Gestapo men. They searched the camp for money and jewelry, killing some Jews in the process. I remember that on this occasion Böttcher shot and killed Mojżesz Gutman and the son of the cantor from the synagogue in Ostrowiec.

In November 1943, Böttcher ordered a selection of Jews in all labor camps. 60 Jews were taken from my camp. I know that Böttcher was the one who gave the order because the director of the brick factory in which I worked, Werman, told us that it happened on Böttcher’s command.

A notice in Polish about the execution by hanging of convicted war criminal Herbert Frederic Bottcher, who was commander of SS and police forces in the Radom district during the Nazi occupation. Participated in executions of Poles and Jews in the Warsaw Ghetto ruins. Sentenced to death by a Polish court after the war and executed on 12 June 1950. 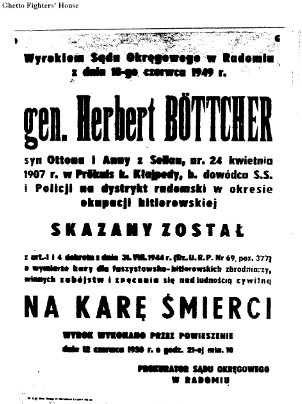