Translation of the last chapter:

Ostrowiec was liberated by the Red Army in January, 1945. After the liberation, Jews appeared who had hidden themselves in bunkers in town and outside its periphery. Later arrived the partisans and those who survived on Aryan papers in Warsaw, later still came the Jews from the Auschwitz Concentration Camp, Gleiwitz, Buna and Blachmir, and a Jewish congregation started coming into being.

A Jewish Committee was created with Aharon Friedental as its chairman. IT took care of restoring Jewish life in town and providing for the returning people who needed support in making their first steps. The suffering Jews were filled with a new hope that presently new life would start for them in a newly cleared atmosphere.

However, very soon their wings were cut and the Ostrowiec Jews realized their sad mistake. The Polish A.K. (Armja Krajowa) has on the 12th March, 1945 organized a murderous attack on the apartment of Pinhas Lederman in the Starakunowski Street and brutally killed 5 people, who managed to survive the terrible catastrophe, and the awful dangers, wounding badly several others. The murdered ones were: the daughter of Yehezkel Krongold, who all through the war managed to hide and live on Aryan papers; Haya Sheindel Spiegel, the daughter of Naftali Spiegel, also surviving on Aryan documents through the war; Leibl Lustig, the 17 year old grandson of Reuben Spielman. He returned a few days earlier with his father from the Gleiwitz Concentration Camp. The boy implored the murderers to save him and have pity on him and he kept showing them his concentration camp number, but this did not help him. The other victim was a woman from Tshmielow who hid during the entire war with the help of Aryan papers.

After this tragedy, the Jews desired to leave the town, but Friedental influenced them in every possible way not to do it, persuading them to stay, as Ostrowiec was, in his opinion, an important assembly point for all the Jews who passed that way and for those returning from camps. It later transpired that he was right, and Ostrowiec served in fact as a useful refuge for a certain time, for those miserable Jews who could from there set out again on their way in search of a new life.

Due to Friedental's intervention, it became possible to exhume all the Jews murdered during the Nazi occupation and bury them duly in the Jewish cemetery. Thus all those buried on Cementowa Square, in the brickworks, and at Kilinska Street, were duly brought to a Jewish burial. A public kitchen was opened and everybody could get there a free breakfast and a free lunch.

The Jews have little-by-little begun to get settled. Many have recovered their shops and houses, and have gradually restored the Jewish life in town. Many Jews from other destroyed towns, started to concentrate in Ostrowiec hoping to start there a new life.

But the outbreak of the pogrom in Kielce put an end to the Jewish dreams and they have left the town. Thus the wonderful Ostrowiec Jewry ceased to exist.

Today not a single Jew can be found in town. There isn't even the old cemetery: the lovely red wall and the tombstones have been totally demolished.

The only thing we are able to do in memory of the Ostrowiec Jewry is just to say the heartrending prayer: May God remember the names of the holy and innocent of the Ostrowiec town, who were killed, murdered, burnt, massacred and choked in the name of our God and our people Israel…

Let their souls survive amongst the living. Let God perpetuate their blood! 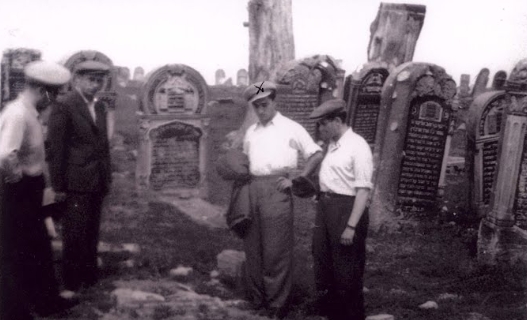