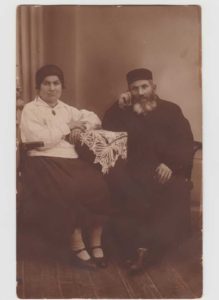 Courtesy of Tania Kac, based on the translation from Hebrew by Yitschok Tzvi Margareten

They were born in Ozarow in the 1880s and lived there till the end of World War I. When the town's Jews were deported, they moved to Ostrovtse (Ostrowiec Świętokrzyski) as refugees with their seven children. In 1918, they suffered a great loss when their two sons, Avraham and Moshe, fell as soldiers in the Polish army in the war against the Bolsheviks.

Leibush Pesach was a God-fearing Jew, who was careful about every Mitzvah small or big. At 3 am, he ran through the empty streets to the bath and to the synagogue. His life was devoted to learning Torah and to prayer. His livelihood came from trade in lime/plaster. He passed away at age 70 at the time of the Jewish deportation from the Ostrovtse ghetto by the Nazi troops.

His modest wife, Chaya, was known as God-fearing, a peace-maker and as a social activist. She adopted two orphan girls, daughters of a sister from Ozarow: Esther and Sara Klaus. She died at age 67, in her beloved Ostrovtse, and she merited to be buried with a proper Jewish burial.  Her funeral escorts wished each other that they should also merit to be buried in proper Jewish burial as Jews, and not have their their bones spread to all directions by the dreadful Nazi murderers.

Their eldest son, Yaakov, and his wife Sheindel, were known as people who followed in their parents footsteps. Yaakov was a shoemaker, but holy learning was his main pleasure. Out of his six children only one son survived by a true miracle, Avraham Chaim, who lives now in Brazil. On Shabbat night, at the time they were sitting at the Shabbat table, Kapo Wishlitzki showed up at their door.  Kapo Wishlitzki was notoriously cruel among the town's Jewish residents, and he extracted Avraham Chaim from the house, despite pleas and begging from the family.

Fate chose him to be the last surviving member of this large family, despite all his great sufferingThe eldest son Moshe, who went to Russia in 1941, returned to his town and family after a year, and he perished together with all the other family members.

Yosef was the second son in this glorious family, and he had 4 children: Shimon, Rachel, Shmuel and Chaim. When his wife Chana and his small children were sent to their deaths, Yosef and his eldest son Shimon made their way towards their wife/mother and they were murdered together with them. May their souls be bound up in the bond of everlasting life.