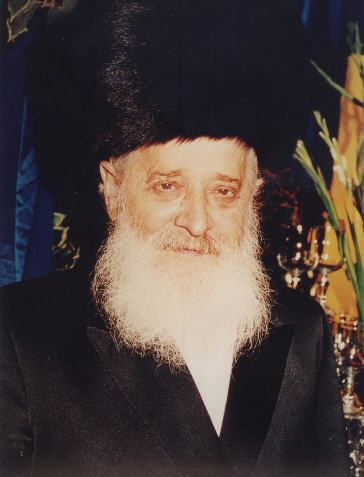 Kalman Rotter, born in 1924 in Warsaw, was the youngest of eight brothers and sisters,
children of Yeshayahu Rotter, who was a strong Hassid of the Ostrove Rebbe (Rav Meir
Yechiel Halstock). Kalman learned in Ostrowiec in the Yeshiva of the Rebbe’s son, Rav
Yechezkel Halstock.
Kalman and his oldest sister Hana (Rotter) Feinbaum were the only ones in his family to
survive the war. His brother Mosze Syman Rotter (b. 1905) was a merchant in
Ostrowiec and was among the many who were deported to Treblinka in October 1942.

The following is an excerpt of Kalman’s testimony about the connection his father Szaja
(Yeshayahu) had to Rabbi Meir Yechiel Halstock as an Ostrove Hassid. (The testimony
was translated by his grandson Noam Rotter.)

"My father z"l (NR: R' Szaja ישעיהו) was one of the Ostrovtse חסידות  founders. When the
"אמרי אלימלך" passed away, the great Hassidim turned to Rebbi Meir Yechiel who was a
Hassid of the "אמרי אלימלך" and was named as "העילוי מגרודזיסק", They asked him to
accept being the leader of the entire community, my father was among them. My dad
was only 15 years old at that time.

Rebbi Meir Yechiel accepted his Hassidim's offer and was announced on the spot as
"The Rebbe from Ostrovsta." My father was one of his great Hassidim, of the the the
"Rebbe from Ostrovtsa" and in addition, my father was a great learner (תלמיד חכם גדול)
and diligent.

When WWI broke out and Germany invaded Warsaw, my father lost his job. He went to
Ostrowiec to meet the "Rebbe from Ostrovsta" in order to get advice and help in making
a living. The Rebbe advised him to become a teacher for young boys and he followed
his advice.

When my father arrived in Ostrowiec, he was welcomed like a family member. The
Rebbe himself consulted my dad about important things. My father was very happy
every time that the Rebbe called him and that he could assist the Rebbe.

My father once told us that one time, when he saw the Rebbe ("נכנס לקודש פנימה"), the
Rebbe asked him "What do you wish and why have you come?"
My father replied, "I just want to be here" ("רצוני להיות כאן")
And when he left the Rebbe, all the Hassidim heard the Rebbe asked him "What is your
wish?"
So my father said, he replied to the Rebbe "I just want to be here".
All the Hassidim immediately asked, "Why didn't you say your wishes and requests?
Are you missing nothing R' Szaja?"
For this my father said to me (NR: to Kalman) - Let me explain to you why I didn't ask
for anything from the Rebbe when he asked me. When every Hassid is doing an errand
for the Rebbe, the Rebbe immediately returns a favor. For one he is blessed to have
children, the other wealth, the third long life, etc. The Rebbe wanted to return a favor to
me but my intention was that I want my wages to be in the afterlife (לקבל את השכר בעולם

הבא). And this is why my reply was that I just wanted to be there. And I am confident
that if I only have access to the Rebbe, I will have great good coming from him."