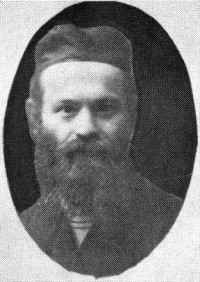 Rabbi Mordechai Shimonovitzwas born in the city of Darawanna, in the Vilna Province.  In his youth, he studied at the Mir Yeshiva and at Beit Yosef, the Novardok yeshiva to learn from Rabbi Yosef Yozel Horowitz, also  known as the Alter of Novardok.   Later, Rabbi Shimonovitz opened a new branch of the Beit Yosef yeshiva in Ostrowiec.

He was murdered by Nazi Gestapo member Peter in the days following the deportation to Treblinka in October 1942.

The Yeshiva of the Moralists “Bet Yosef”