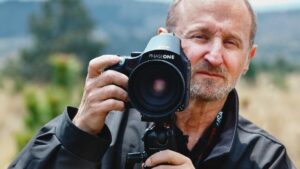 Rafael Goldchain, the son of Emilio Goldchain Precelman and Esther Rubinstein Baumfeld, is a Canadian Toronto-based photographer. He earned a Master of Arts - Art History (University of Toronto, 2017), a Master of Fine Arts (York University, 2000), and a Bachelor of Applied Arts (Ryerson University 1980).

Goldchain's work is the subject of two book monographs: Nostalgia for an Unknown Land and I Am My Family, and of a documentary film entitled Beautifully Broken: The Life and Times of Rafael Goldchain. In his work I Am My Family, he includes several of his Ostrowiec relatives.

His photographs have been exhibited across Canada, the United States, Chile, Cuba, Germany, France, Italy, the Czech Republic, and México.

His work is included in private collections including the Bibliothèque Nationale, Paris, the National Gallery of Canada, the Museum of Modern Art, New York, the Museum of Fine Arts, Houston, the Portland Art Museum, and the Museum of Photographic Arts, San Diego.

Goldchain teaches in the Honours Bachelor of Photography at Sheridan College in Oakville, Ontario, Canada.

I Am My Family