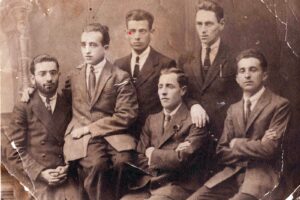 Moshe Yaacov Toppel was  the son of Reb Chaim Nochum and Chana Rochel Toppel, and grandson of the Ostroweic Rav, Reb Dovid’el Hakohen Rapaport - whose lineage stretches back to the holy Schach [Rabbi Elazar Menachem Man Schach, 1899-2001] and to the Kotzker Rebbe, of blessed memory.  He married Pearla and had 2 daughters Ratze and Raizel and son Mordechai Zeev.

Below is excerpt from Yizkor book 1971 article.

The institution that was the busiest in the ghetto was the Chevra Kadisha [Jewish burial organization], that did not know of one single quiet moment the entire time, from the beginning of the Nazi occupation until the mass evacuation. Hundreds of people died of hunger, sickness, and mainly from the typhus epidemic, whose burial carried great danger from being in contact with the terrifying, deadly disease. Hundreds of others were massacred by the Nazi murderers, who, in many instances, did not want to allow the victims to be buried according to Jewish law.

One of the most devoted members of the Chevra Kadisha risked his life to bring the victims of the ghetto to a Jewish burial, this was Reb Moshe Yaakov Toppel, may his blood be avenged, a longtime member of the Chevra Kadisha. ....While still a young man he stood out among the best students in the Ostrowiec Beis Midrash [Study Hall], and also as a faithful chassid. In the later years, he helped establish the “Tzeirei Mizrachi” [“Mizrachi Youth”] in the city. For many years, he was on the committee for this organization and a delegate for conferences of the Mizrachi movement. Over the years, he delivered a shiur [lecture on religious studies] to tens of Jews in the old Beis Midrash. While in the ghetto, he saw it as his holy responsibility that Jews should have a proper Jewish burial.

During the evacuation, he was transported along with his wife Perele and two daughters, Ratze and Raizel, to Auschwitz. His son, Mordechai Zev, miraculously was saved and lives in New York today [he lived in New York until his passing in 2010].