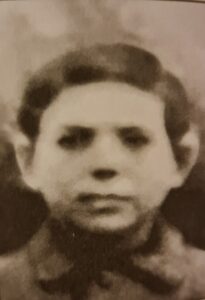 Reuven Jakubowicz was born in the town of Konin, Poland. He and his family were forced into the Ostrowiec Ghetto in 1940.

In his book Holocaust Survivor, Mike Jacobs' Triumph over Tragedy, Mike Jacobs/Mendel Jakubowicz recounts about his time in the Ostrowiec ghetto and his brother Reuven’s desire to fight with the partisans.  He speaks about Reuven in the excerpt of page 53 below:

....He decided to go join the Jewish underground resistance fighters.  I begged him not to go with this underground.  "Reuven," I said, don't go—it’s no good.  It's not the right thing to do." Once again, I felt that something was going to go wrong.

Reuven wouldn't listen to me. "It is better that I go with them to fight and die fighting than to sit over here and do nothing," he said.

We had heard that there were Jewish and non-Jewish partisans hiding in the forest outside the ghetto, fighting the Nazis. We had this news because sometimes the partisans would come into the ghetto to get money to help them with their fighting. When Reuven decided to join the partisans, a Jewish underground group, he wanted me to go, too. I told him, "No, you go ahead.  If everything works out, I will come see you.  I will go, too."  When Reuven left the ghetto that day, it was the last time I ever saw him.

I later found out that while he was in the partisans, he and his group were hiding. Two people from the Polish underground group, the A.K., went to where my brother’s group was hidden. These men told my brother's group that they needed to go on a mission, but first, all their guns had to be checked over. The two men gathered up the hand grenades, all the handguns and machine guns, and then began firing at my brother's group. My brother was killed that day in February 1943. Three people from his group survived, as they had been left for dead.