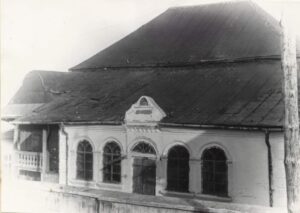 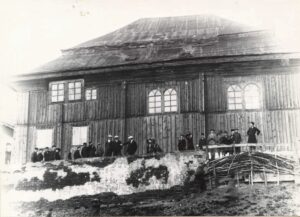 The main Ostrowiec Synagogue was destroyed by the Nazis during their occupation of Ostrowiec, however many details and pictures are available to be seen at Wojtek Mazan’s blog.

The photographic documentation, preserved in the Ostrowiec museum, was made in 1937 by the famous photographer from Ostrowiec, Tadeusz Rekwirowicz.

A translated excerpt is below:

History of the synagogue.

According to oral records, the synagogue in Ostrowiec was to be built in 1610 . There is information about a fire that broke out in Ostrowiec in 1713/1714 , as a result of which only the house of prayer and the synagogue remained in the Jewish district, requiring renovation of the front wall. Three people took part in the renovation of the synagogue: Herzke , Simon ben Arahon Daft and Jeheskiel from Krakow, who was an artist who carved the Ark of the Covenant in wood.  The polychrome was attributed to Jehuda Lejba ( Arye Jehuda Lejb , son of Boruch).

In the interwar period, the synagogue was recognized as a historic building.  During World War II, after the liquidation of the Jewish ghetto, the Germans began to systematically destroy this district (many houses were razed to the ground), also destroying the historic synagogue and the brick building of the house of prayer (Bejt Hamidrasz), which also housed a cheder (school). The synagogue was demolished during World War II. 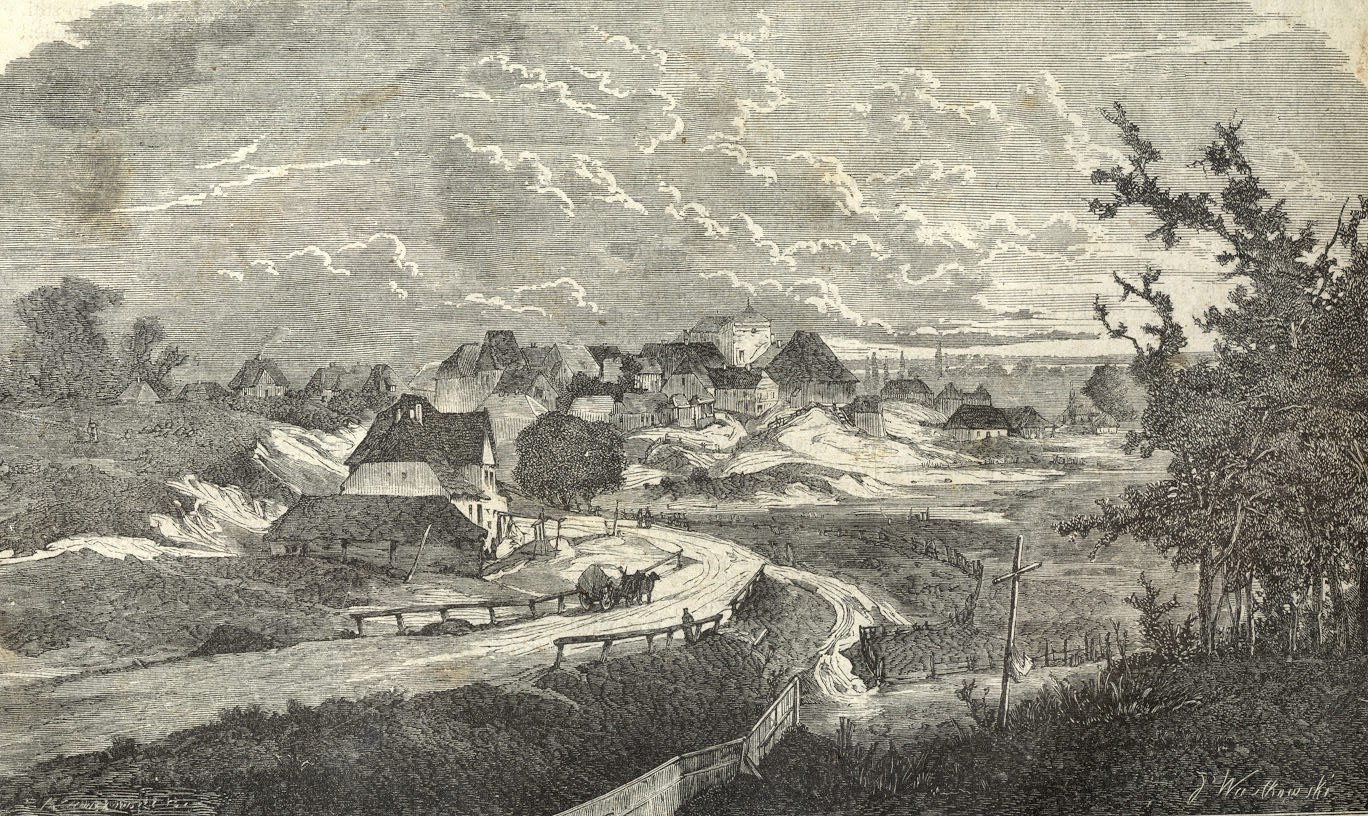 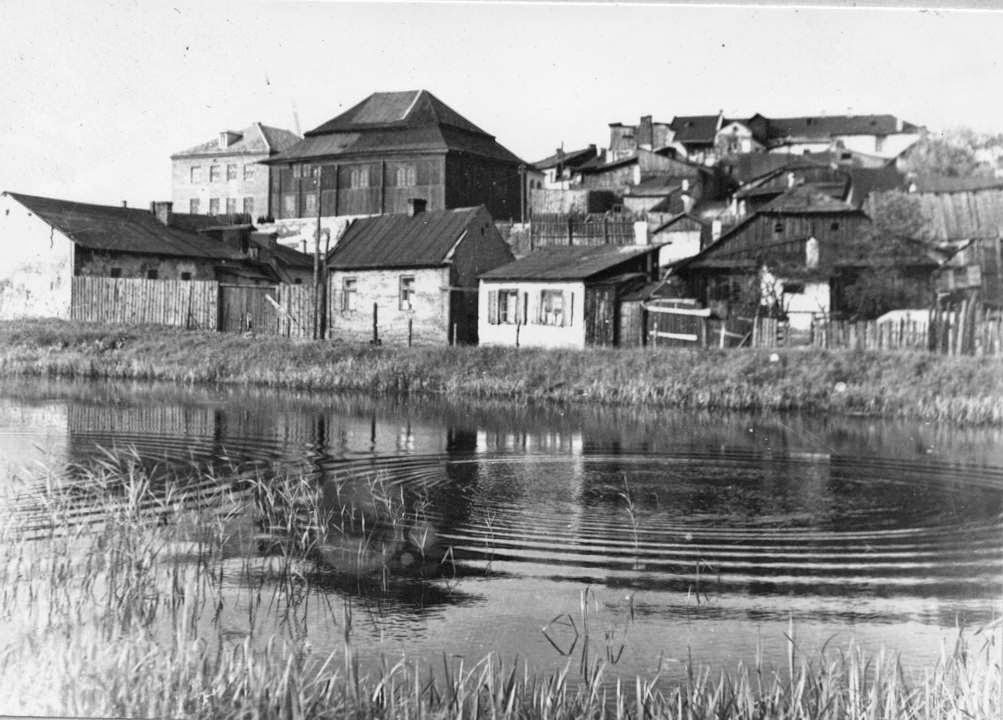 View of the synagogue from the side of the ponds 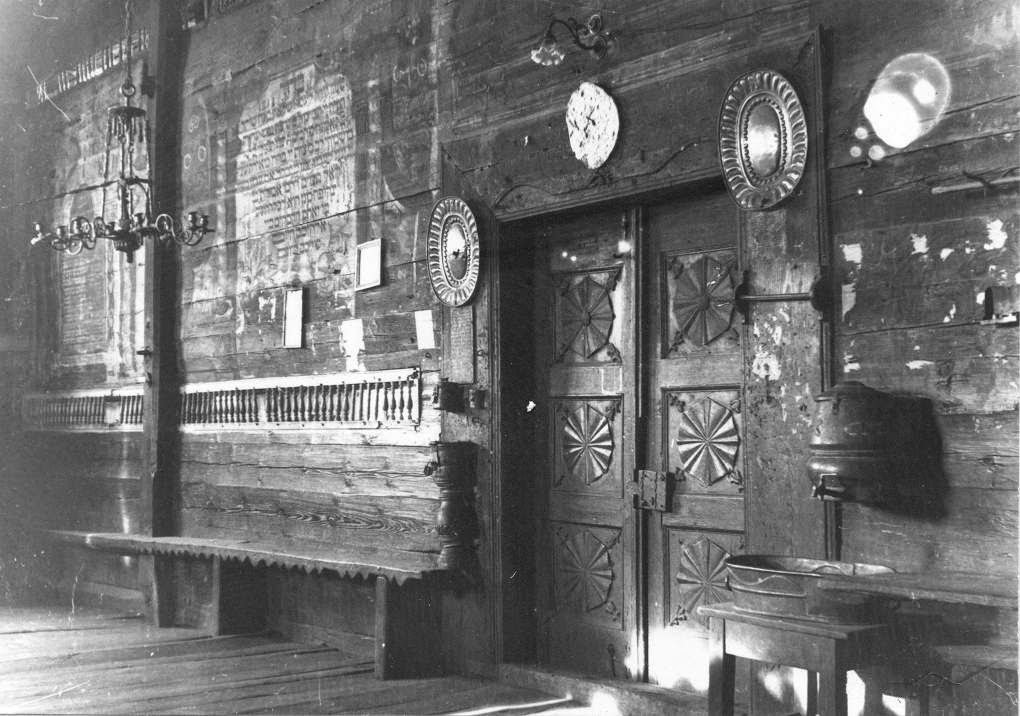 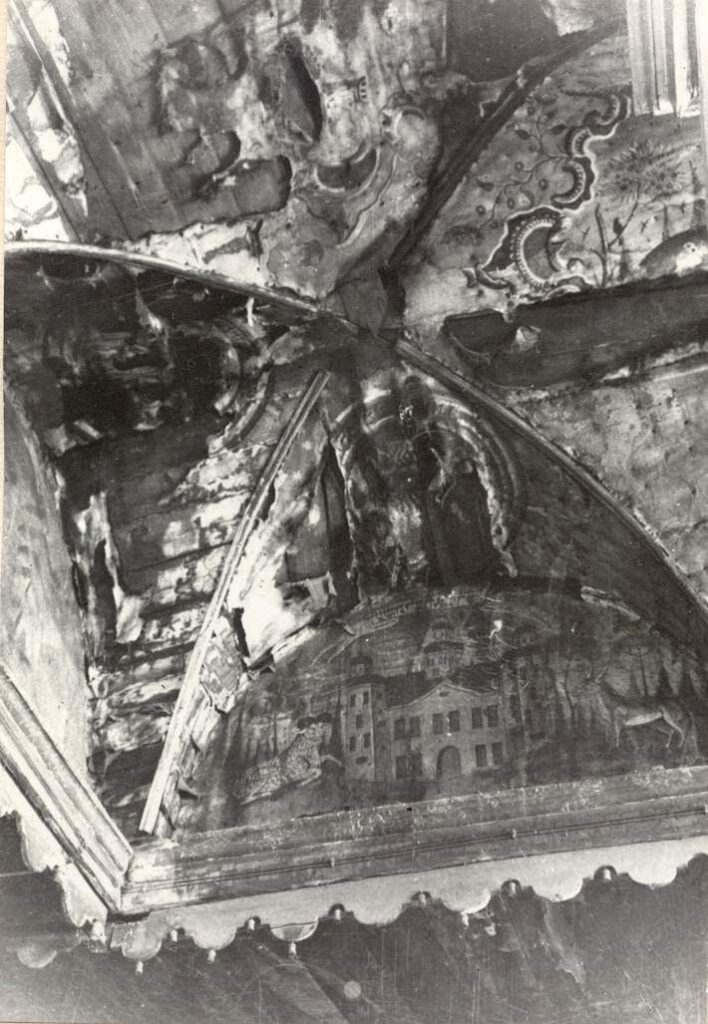 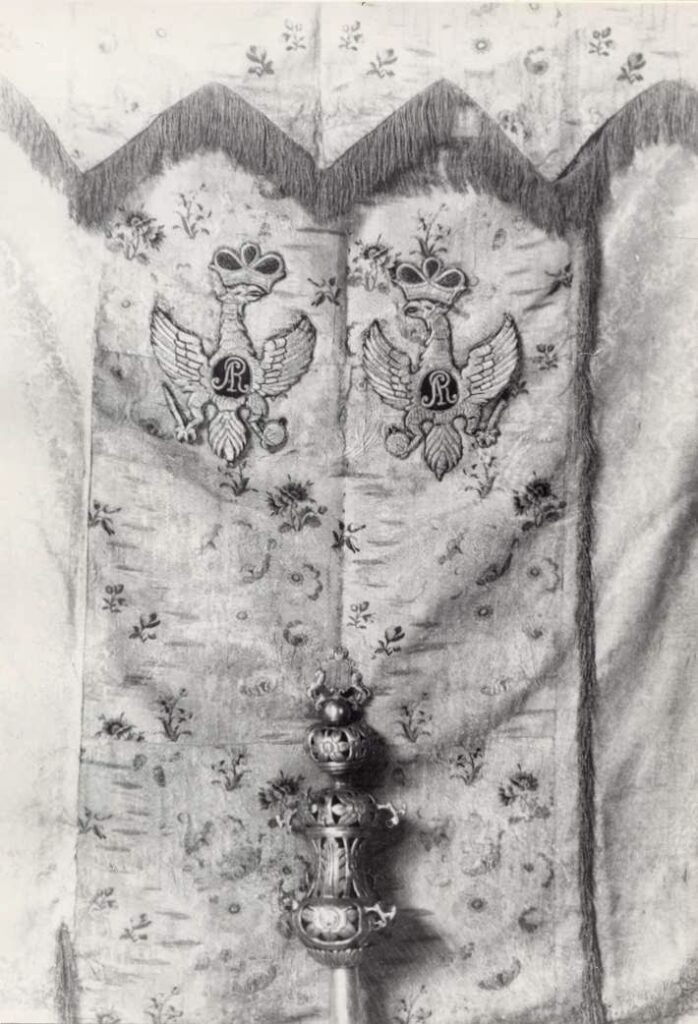 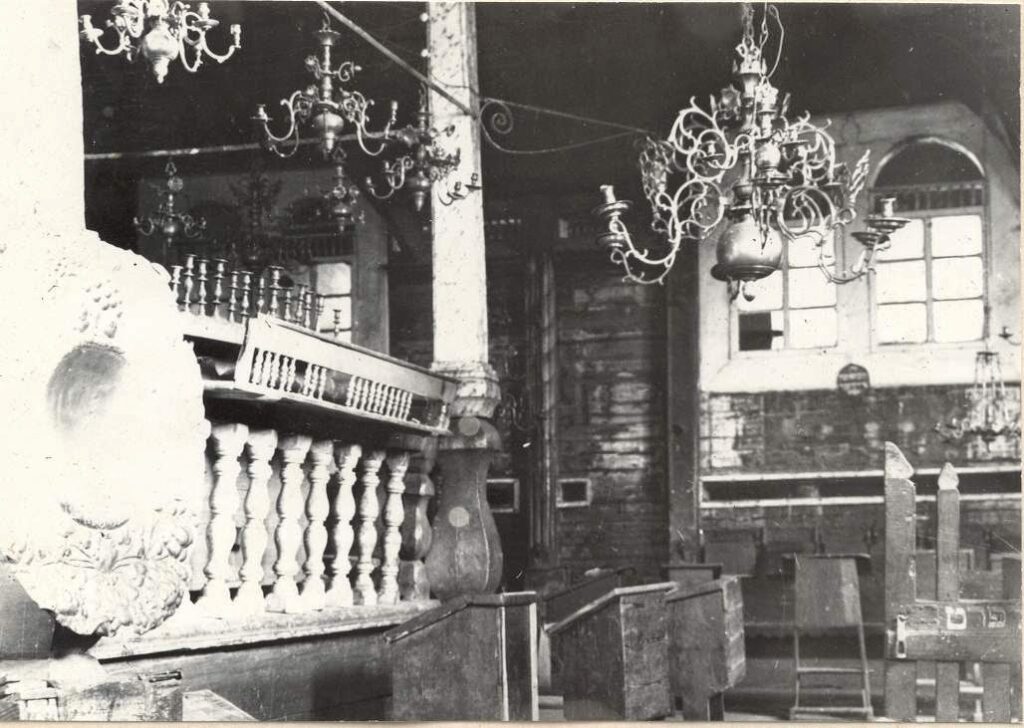 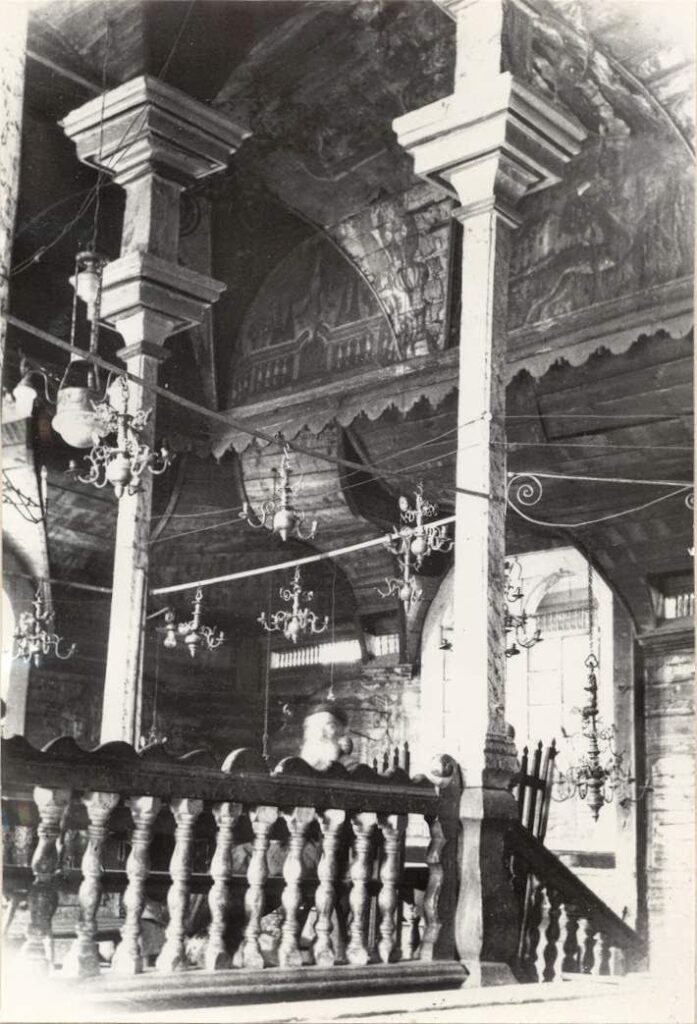 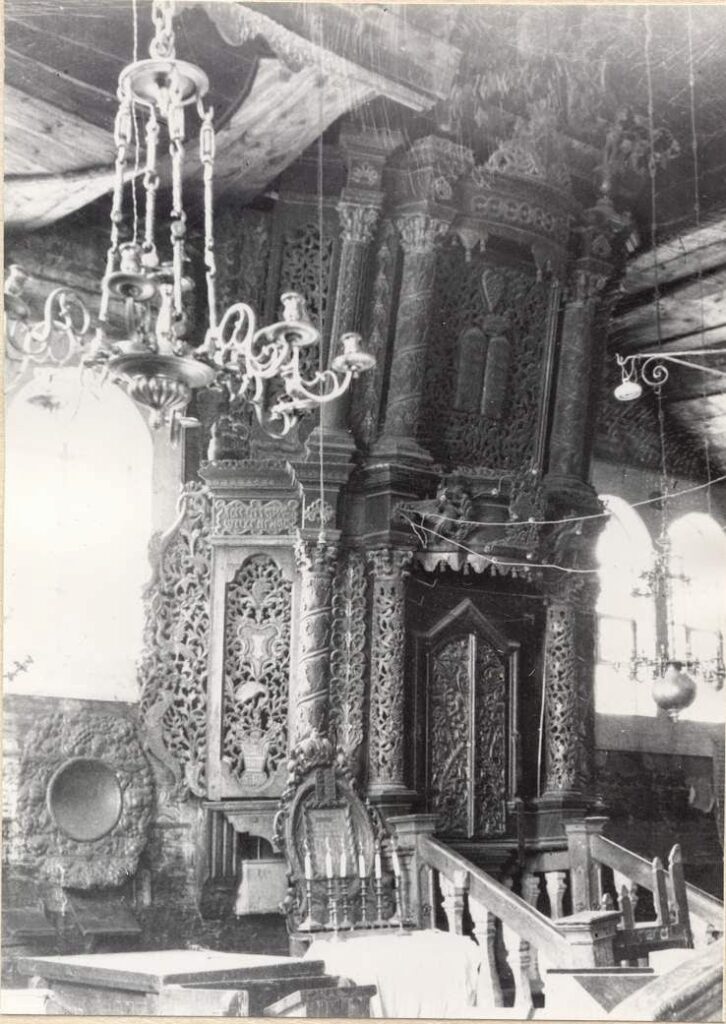 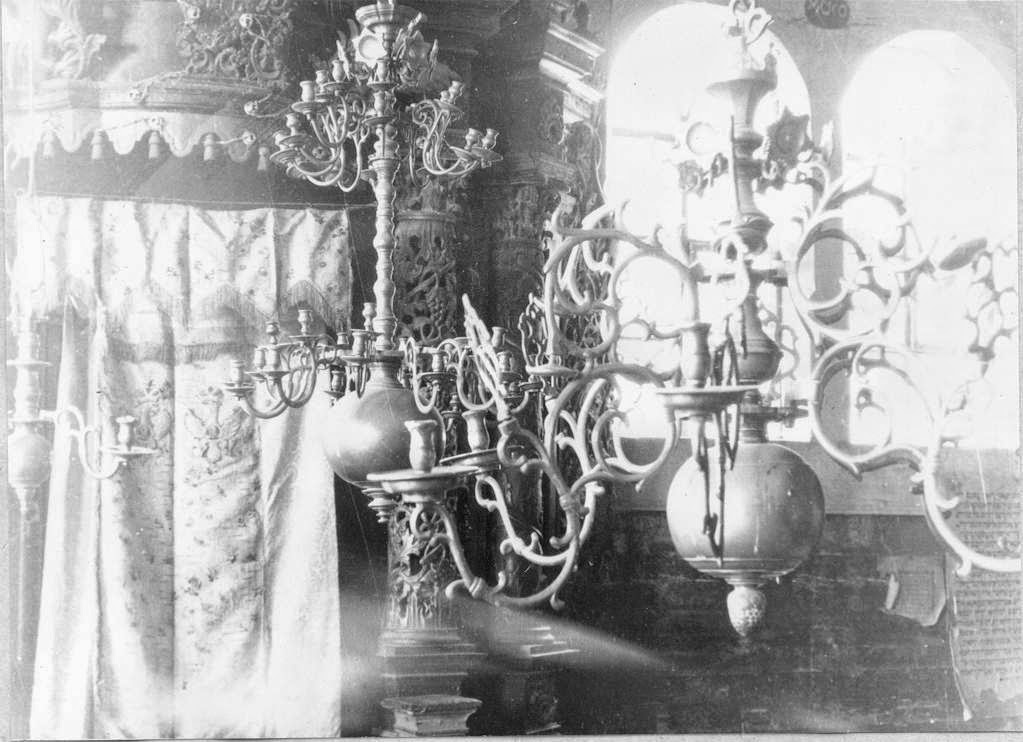 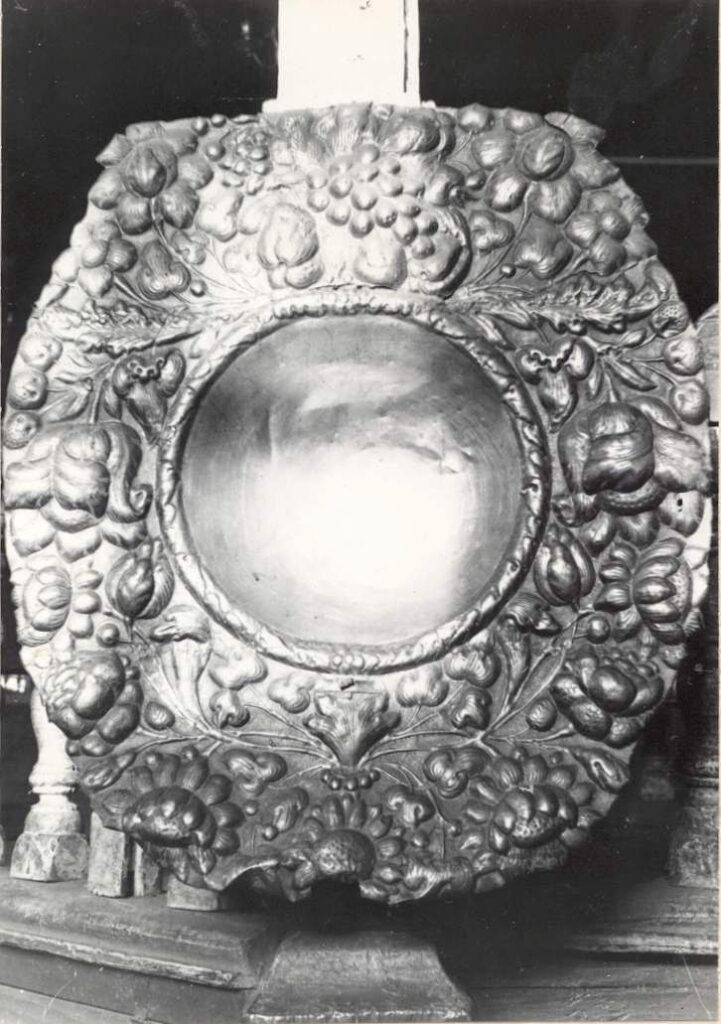 Reflector at the bimah 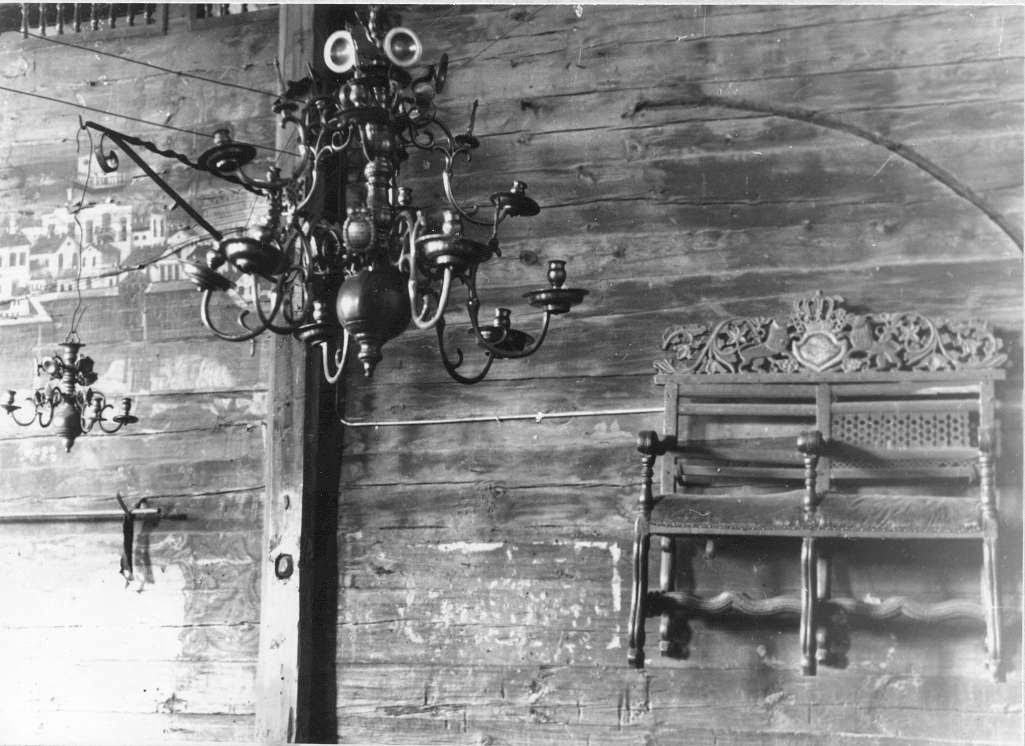 Description of the synagogue

When the building at ul. Starokunowska 1/7, you go down towards the Młynówka (Kamienna branch). In the past, there was ul. Młyńska. Going down ul. Starokunowska towards ul. Sienkiewicza, on the left, there is a horizontal green belt descending a steep slope towards the ponds. This is where the Jewish synagogue and the house of prayer, destroyed by the Germans during World War II, were located. At the bottom, at the descent from the hill, there was a Jewish bathhouse (mikvah). Originally, these buildings formed a compact synagogue complex in the town's urban layout.

The photographic documentation preserved in the Ostrowiec museum and made in 1937 by the famous photographer from Ostrowiec, Tadeusz Rekwirowicz, is of particular importance.

The main room of the synagogue was a prayer room, intended only for men. On its eastern wall (usually located next to the main entrance) there was the Aron ha-kodesh  (Holy Ark,), in which were kept the Tora The Aron ha-kodesh  of the synagogue in Ostrowiec is an example of how, under the influence of the construction of altars in Catholic churches, magnificent, high, richly decorated retabulas were built, captivating the Ark [...]. The described Aron Kodesh - was a type of an architectural, baroque, columned, two-story altar and stood on a platform surrounded by a balustrade, which was accessed by stairs. Both storeys were the same width, richly carved. The columns were of the Corinthian openwork type, external on the lower tier and internal on the upper tier with spiral stems. They had a rich sculptural decoration with floral motifs and a decorative finial. The top of the lower tier was used to hang a parochet with a lambrequin. In the middle area of ​​the lower floor, between two double columns in the frame, there were intricately decorated doors closing the cupboard with the scrolls, and in the upper floor, against the background of rich openwork sculptural decorations, there were tablets of the Ten Commandments.

The  Aron ha-kodesh was hidden behind a drawn curtain (parochet) [...] the parochet of the synagogue in Ostrowiec was not a typical object of Jewish religious art. According to tradition, during the January Uprising, the wife of one of the noble insurgent activists ("descended from the royal family" ?!) offered in thanks for the help provided by Jews to the insurgents a curtain decorated with gold to the Ark of the Law in Ostrowiec synagogue. This veil, however, was not shown to the public. Only after Poland regained independence, it was removed and used during holidays as a symbol of good relations between Jews and Christian residents in Ostrowiec. The initials "PR" were to be embroidered on the fabric (Comparing this relationship with the photograph taken by T. Rekwirowicz allows us to consider the oral tradition as true, but slightly distorted . This unusual parochet was made of a homogeneous fabric in the central part, embroidered with plant motifs, with fringes on the right edge, while in the side parts of plain fabric without patterns. However, the most intriguing part of the central fabric were the two embroidered eagles with their beaks facing each other, with stylized prominent crowns, with outstretched wings, holding a sword and royal apple in their claws, on their breasts, in a dark (red?) Oval, the initials "AR" (Augustus Rex) of the Polish king Augustus II the Strong. The Polish eagle appeared on parochetes and lambrequins, altar carvings, crowns, lamps and Hanukkah candlesticks already in the 17th and 18th centuries. In this case, however, the adaptation of a typically Polish fabric for sacred purposes in the synagogue was unusual. […] fringed on the right edge and plain plain fabric on the side parts.

Also to the right of the Aron Kodesh , there was a stand for the cantor (Hebrew: chazan) who led the prayers in the synagogue [...] In the stories of Jews from Ostrowiec, the memory of Meirl's Khazan "Hasid of Warka", who had a beautiful voice and wore a patriarchal beard, lives on . After him, he became a chazan Mosze Wohlman , who introduced the singing of prayers in the synagogue in a choral form.

On the wall of the synagogue in Ostrowiec we can also see the so-called Elijah's chair (Hebrew: kise sheel Elijahu) - an empty chair placed during the rite of circumcision, which is said to be occupied by the prophet Elijah. The chair is double with an openwork backrest topped with a carved floral ornament (in the center a crowned cartouche supported by two lions) and curved handrails, padded with velvet. […] The child lays down for a moment in the chair, and thus on Elijah's lap, before the circumcision itself.

Candlesticks-candlesticks of this type, hung in the synagogue from the ceiling, were ended with a sphere. Long S-shaped arms arranged in one or two floors were attached to the shaft. The sleeves for candles had profits at the bottom - plates collecting the melting wax.

The Shul-hoyf - The Center of Jewish Life