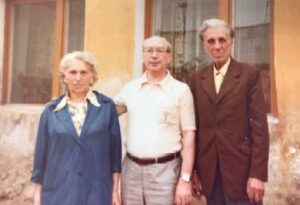 Tadeusz and Marianna Pastuszka and their two children lived in the village of Chmielow. In the autumn of 1943, Moshe Broker, who was working as a slave laborer in the Ostrowiec steel factory, contacted with Pastuszka and asked him to prepare a hiding place on his farm for a few members of his family and others. A total of 17 Jewish prisoners fled from the camp and found asylum in the shelter the Pastuszkas had built. They remained there until the liberation in January 1945.

"Despite the fact that the money they received from the fugitives was insufficient to cover the cost of building and maintaining the shelter, they supplemented the rest from their own money. All their efforts to save the Jews were motivated by altruism rather than by a desire for money.

On December 6, 1984, Yad Vashem recognized Marianna Pastuszka and her husband Tadeusz Pastuszka as Righteous Among the Nations." (Source: Yad Vashem)

Link to the Rescue Story

Their page of "Righteous Among the Nations"