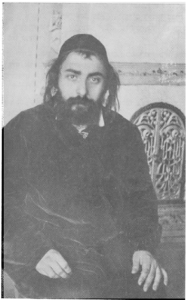 The Martyrdom of the Last Ostrovtser Rebi

The tenth of Tevet is the yortsayt for a Rebi who on that day was killed in kodesh ha’shem in Hitler’s Poland.

It is the Rebi Rov Yekhezkel may God avenge his blood, the son and heir of the old Ostrovtser Rebi.

The yortsayt of the Rebi falls on the tenth of Tevet and also of another twenty of his khasidim, who were murdered on the same day.

I know this from a document, from a letter, that I have in my possession and which I publish here.  The letter was sent to me some time ago by a Jew from Tsoyzmir (Sandomiezsh) who saved himself and has lived the last years in Canada – Mr. Yeshaye Zoberman.

Here is his shocking letter, which depicts the martyrdom of the Rebi and of a Jewish witness:

“After the slaughter in Ostrovtse there were only about fifteen hundred Jews left, who worked in a factory six kilometers from town, in Bodzshekhov.  The Ostrovtser Rebi, Rov Yekhezkel, was hidden among those remaining.  The Gestapo suddenly raided the whole work site, searched for the Rebi but did not find him.  It was decided to take the Rebi to Tsoyzmir.  At that time there was a second ghetto in Tsoyzmir – the first had already been eradicated.  The German authorities published a so-called ironclad decree to all the Jews hiding in forests and fields, in attics and cellars, that if they returned voluntarily to Tsoyzmir nothing would happen to them and they would get work, bread and an apartment.  The Germans spread the rumor that those who returned would survive the war.   Thousands of Jews who had been in hiding were drawn to Tsoyzmir from all directions.  Had they believed the Nazi persecutors?  No.  But there was no alternative.  They were weary to death, terribly tortured by hunger.  The winter had been a frightfully cold one – there was no more strength for suffering.

But the Tsoyzmir ghetto was then ruled by the Nazi murderer Lesher.  He made the ghetto assemble twice a day for him to “give attention” and he recounted to see whether all the ghetto-folk were there.  When someone was sick, pregnant and so on, they went to their home and shot them on the spot.  A hope nonetheless glimmered in Jewish hearts that they might somehow outlive the murderers.

It was under such circumstances that they brought the Rebi to Tsoyzmir.  His entire head was bandaged up so that his beard was not visible.  The Rebi was smuggled into the ghetto for a hefty fee, set up in a closed house where the entrance was walled up, and they served him and brought in food through a hole in the floor.

This was in the second half of Kislev.

Two weeks later the Gestapo chief Braun came to the ghetto.  Tsoyzmir ghetto was under his command.  He went into the Jewish community office and demanded that they present the Ostrovtser Rebi within one hour.  When they told him that the Rebi was not in the ghetto he let it be known that if they did not present the Rebi to him within the hour, he would order that two hundred Jews with their wives and children be burned alive in the shul.

The leaders communicated with the Rebi.  The Rebi told them to take him to the Gestapo chief.  The Rebi did not answer the murderer’s questions.  The Gestapo chief photographed him several times in various positions.  After that he ordered that the community leaders take the Rebi under their responsibility until tomorrow at nine in the morning when he, Braun, would come for him.  Should it happen that the Rebi fled he would carry out his “coercion”: he would burn two hundred Jews.

In the community office where the Rebi was sitting, they began gathering Jews and reciting psalms.  The Rebi immersed himself in the mikve that was in the ghetto.  He chopped through the ice and immersed himself.

No Jew in the Tsoyzmir ghetto slept the entire night.  All were reciting psalms.

Since it was almost day (it was the tenth of Tevet) the Rebi dressed in a white kitel, prayed, recited slikhes and al kheyt – the whole ghetto wept together.

At exactly nine o’clock the Gestapo murderer showed up, accompanied by Nazi gendarmes. Twenty Jews appealed to the persecutor with a request:  they would volunteer to give their lives for the Rebi’s.  Braun laughed; very well, he would carry out their request.  He would shoot all of them, but along with the Rebi.  And he ordered the gendarmes to arrest the twenty Jews.  Then they told them to position the Rebi in the shul courtyard against the wall.  When he pointed his revolver at the Rebi the Rebi called out loud and fast, “Shema Yisroel, d’alkeynu, d’akhod”.  Six bullets the Nazi bandit shot into the holy man.  A peasant wagon had already been prepared.  They laid the martyr in the wagon and ordered it be driven to the cemetery.  The twenty arrested Jews had to dig a large common grave for themselves in barely an hour.  They were shot soon after.  This happened on the tenth of Tevet sav-shin-giml (13 December 1942).”