Based on recorded testimony in summer of 2001 and discussons between his daughters Tzipi and Ronit November 2022.

Zeev Wolf Ber Blisko was born in 1926 or 1927, son of Yaacov  and Masha (  daughter of Faiga Gitel  Sherman who was sent to Treblinka) Blisko.

-Avraham Leib b. 1918 (murdered with his wife in the Holocaust)

As a child he went to cheder and the Mizrachi school.

Zeev was about 12 years old when the Germans invaded Poland. He lived with his mother as his father died before the Ghetto.

He began working as shoemaker. Later Zeev got a job working at the steel factory and that is how he avoided deportation to Treblinka like most of the town. Somehow, his mother was hidden among a Christian family and was saved.

In 1944 was deported to Auschwitz Birkenau. He worked in forced labor in Buna and then transferred to Mandelberg Germany until he was liberated on May 8, 1945, when the Russians arrived.

In August 1945 he returned to Ostrowiec to be reunited with his mother.  He lived in a house of his mother’s brother on Rynek 28 . On Dec 29, 1949, Zeev and his mother moved to Israel. 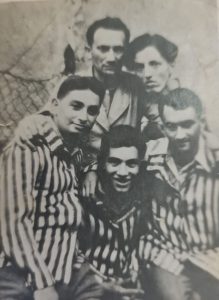