Researched and Edited in Polish by Wojtek Mazan. Translated from Polish with assistance of  Google translate.

The Polish article from Wojtek's blog can be found here.

"I was shocked by the news about Ponary. I did not know what to do with myself. Heniek knew only about my family that they were alive. I had to decide if the journey I planned made any sense. The blow was great. It's not a pogrom anymore! Knowing that Ponary is death has knocked me off my feet. Many times I had it at the end of the language, but that night I first realized that it was a total death. It was in November 1941. And that night I had to decide what to do. I was determined not to return to the ghetto, no matter what. I wanted to be a bit alone with myself. 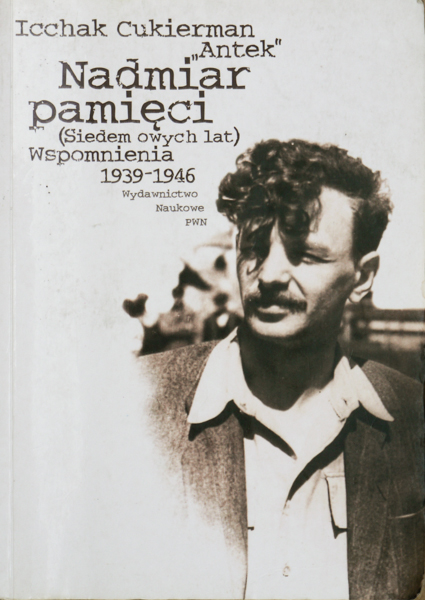 [...] I remember that night at the Warsaw railway station, as the Germans beat Poles there. Really beat. I was not beaten by accident, but I saw the humiliation of Poles. In those days there was no lighting in the cars and my travel companions could not see my face. It was probably three in the morning. Autumn, gloomy night. Just like my mood. Raining buckets. That's how I got to Ostrowiec. I drove from the station by car. Whoever had a train ticket could be on the street despite the curfew.

The car reached the market and everyone got out. Me too. It did not stop raining. I had to find my friend's house. It was dark. I had matches. I lit them all, until the last one. But I could not find the street I was looking for. Suddenly I heard German words and barking dogs. I knew that if they caught me, the train ticket or quite good false documents would not help me.

I entered the narrow street. I remember that I stood and asked myself the question: Maybe there are Jews here? The night was quiet. I heard German language again and the barking of dogs. I knocked on some door, heard whispers, the light came on and the door opened. I asked: Jews? And they let me in. It turned out that it was a home restaurant. The name of the owner of the restaurant was Cukierman. I told them that the Germans are approaching. They turned out the light, they sent me to a bed. They also gave me something to eat. But it was a sleepless night.

The next day I met Gerszon Dichter, a Hebrew teacher at the local Tarbut school. He was close to Hashomer Hatzair. He invited several friends to him. One of them was the young Hebrew poet, Malkiel Lusternik who was the head of the district ŻSS and lived in Opatów. The meeting was also attended by Yitzhak Rubinstein, chairman of the Judenrat in Ostrowiec. He was a tall, gray man. Dichter told me that he is an honest man. And there were others whose names I do not remember anymore. They gathered to hear the messages I received. I told them in detail about the news from Heniek brought back from Vilnius by Heniek. They listened intently, asked if we trusted Grabowski, and were unable to comprehend how they could, simply, kill the entire Jewish community.

One of them said: "It's horrible, but you have to assume that we are talking about the revenge of Germans on Jews who were under Bolshevik rule. As you know, the Jews welcomed the Red Army friendships, which caused the hatred of their neighbors. The Germans have their bills with the Bolshevik regime. The Red Army has escaped. And who stayed? Jews! We are a scapegoat. "

Rubinstein said that it is difficult to conclude from this one case that Germany has a unified model of treating Jews. Either way, we're addicted to the local authorities. If you manage to establish a good relationship with the on-site Germans, there is a good chance of surviving the war. Take, for example, two cities: Radom and Kielce. In Radom, they beat Jews for not taking off their hats for the Germans, and in Kielce for taking off their cap. Or Warsaw: a closed ghetto, surrounded by walls and barbed wire, plagued by hunger and typhus. And in Ostrowiec - an open Jewish quarter and food in abundance. How can one conclude that one German hand manages the Jewish fate?

In Ostrowiec, relations with the local German authorities were excellent. Understandably, there was no shortage of tragedy. However, you should not expose yourself to unnecessary dangers, neither the individual nor the whole community. Inevitable suffering is enough. Young people from Ostrowiec and Opatów suffered a lot while building German fortifications on the Bug before the outbreak of the German-Soviet war. Now there is peace in Ostrowiec. Shortly before my arrival, an evening dedicated to the Jewish Social Self-Help took place in one of the rooms, and the German officer sat in the first row and applauded. . You must not generalize, no matter how deep it is sadness and pain.

That's what they told me in Ostrowiec and they thought so in Opatów. Rubinstein tried to maintain good relations with the authorities and he believed that the "good" German would always be applauded. Rubinstein, and with him others from Ostrowiec, were the first to learn about Vilnius, about the great slaughter. It is doubtful whether they drew the right conclusions. And indeed, when the critical moment came, Rubinstein behaved exactly the same as the people of the Judenrat in other places.

I spent a few days in Ostrowiec, and then I went - on foot - to Opatów. I wanted to be alone. I was agitated, different thoughts did not give me peace. When the first depression and fear passed, the picture began to clear. I knew that the storm does not destroy the seed deposited in the earth. It is in these days that the importance of the Movement is extremely important. It is necessary to gather strength and undertake activities dictated by reality. Of particular importance in such days is the kibbutz, in which young vital forces will concentrate to prepare for the coming days. I was thinking about setting up a training kibbutz in Opatów. Although there was no railway station and you had to go there on foot from Ostrowiec.

My conversation with Malkiel Lusternik on this subject failed. We had a large group of companions there, including Kalman Czernikowski, and I thought that with the help of Lusternik we would be able to set up a kibbutz there. But Lusternik had reservations and told me clearly that he would not be able to help. In the past, he was close to Gordonia and a member of Hitachdut. On some occasion, I told Yitzhak Kacenelson about this matter, who was his friend. And Yitzhak wrote a very sharp letter to him

Help came from an unexpected side. Rubinstein, chairman of the Judenrat in Ostrowiec, agreed to give us the apartment and other necessary resources. That's how we set up a new center, just in these painful days. Rubinstein helped us find a job on the spot. In addition to the local youth, a group of young refugees concentrated there. Among them were Frania Beatus (footnote 4:  Frania Beatus, member of Dror, came from Konin, she came to Warsaw in 1942, linker Cukierman on the Aryan side, committed suicide on 12 May 1943, aged 17 ), which later played an important role . I knew part of the people from Ostrowiec and Opatów from the summer camps organized by our movement.

About a week later, I returned to Warsaw. When I was in Ostrowiec, a regulation was issued, according to which a Jew caught on a train without permission would be shot. A young Jewish boy from Ostrowiec was caught at the train station - maybe he did not even know about the order - and was shot on the spot.

Now, when I returned from Opatów, because my documents were not the best, and because I was very depressed, I decided to try to get papers from Lusternik that would allow me to travel freely whenever possible. Lusternik gladly arranged it for me. I traveled to Warsaw as the envoy of ŻSS in Opatów and the surrounding area.

In our life a new chapter began, one of the worst. Its characteristic feature - the realization of the end. [...] The reactions were different. Youth absorbed not only information, but also its interpretation. And the interpretation was: it's the beginning of the end. Total death sentence for Jews.

We did not accept the interpretation that I heard also in Ostrowiec that all of this falls on us because of communism. [...] This was an interpretation of the older generation. Why did I reject it? I thought that if it was the revenge of Germans on Jewish communists, they would do so in the first days after conquest of the eastern territories. But it was a planned and organized activity. [...] It was not an occasional eruption. It was still before we received information about Chełm [on the Ner], which started the whole pair in December-January.”

“At a distance of 100-150 meters from the gate, I saw Frania Beatus, the liaison officer whose sight always made me smile. She was in the Dror movement, she was maybe 16 or 17 years old. She was a very nice blonde, she came from Konin. A Hashomer Hatzair unit was operating there. I remember their specific Jewish dialect I have never heard in any other place. Before the war, I did not know Frania - she had to be 16 at the time.

After the deportation of Jews from Konin, she reached Ostrowiec, where she joined the Dror movement. Berl Braude drew her to the ŻOB. The organization operated in Ostrowiec until the end of 1942, when they were instructed to dissolve the organization because they had no weapons and were unable to defend themselves. Berl then moved the entire group to Warsaw. Because Frania had the appearance of a typical shiksa (a non-Jewish girl), we sent her, at the beginning of 1943, to the Aryan side as a liaison officer. Now her job was to take me on the Aryan side and organize a flat for me.

Frania did not stop crying. She said that she could do nothing more, she could not live longer and intended to commit suicide. She repeated it several times. By the way: Frania had a boyfriend, his name was Dawid Szulman.  Frania did not know if David was alive or dead. David came from Ostrowiec and probably had foreign citizenship, but he burned his documents, joined the Jewish Fighting Organization and refused to leave the ghetto. It is possible, however, that I am may be mistaking him with someone else. Anyway, not only was this the cause of Frania's mental state, which continued to cry and talk about suicide. [...]”

"In the Warsaw Uprising, we fought in various parts of Warsaw. A group of ŻOB members was, for example, near Okęcie. I was in their bunker shortly before the outbreak of the uprising. The Germans captured a bunker and shot our fighters. It was a group of Hashomer Hatzair members who came from Ostrowiec in December 1943. Before that, they were in the woods and we took them to Warsaw. I thought that they should leave the forest, because in this area (about 100 km from Warsaw) they did not have a chance to survive in a partisan unit. They were not associated with either the Home Army or the Home Army; they were hated by the surroundings. The hatred of the Jews, as well as those who helped the Jews, was boundless.”