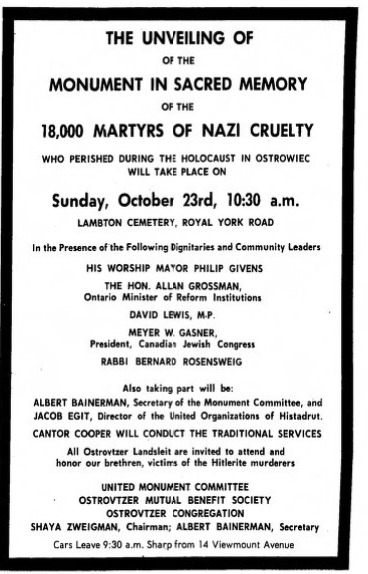 Statement at 1966 Unveiling of Ostrowiec Monument in Toronto

Toronto - At the local Toronto Mutual Benefit Society, a special committee was set up whose objective was to perpetuate in a common grave, under one common tombstone, the holy martyrs, Nazi victims from Ostrowiec. It was decided to put up a memorial for this purpose.

In conjunction with this holy project, the monument committee of the Ostrowiec society published the following remarks:

Twenty-five years have passed since that gruesome time, when Jewish blood flooded settlements without limit, among which was also our hometown Ostrowiec, and a large part of the Jewish population was murdered in the most barbaric, sadistic way. Among those [who died], were the fourteen Jewish partisan youths, who fought so heroically against the armed enemy, the Nazi beast.

May their memory be blessed!

Ostrowiec contributed its part to the martyrs of our nation and to the heroic sanctification of God’s name in the fight, in the tragic moments of our history. With the last breath on their lips, our holy martyrs left behind a task for us: not to forgive and not to forget! Because of that, we have to carry out this holy mission during our lifetime. We will do this by putting up a monument in their memory.

For us the survivors, there is a responsibility to guard in sanctification the beautiful name of the Ostrowiec Jewry. We summon all the Ostrowiec compatriots, wherever they may be, to participate and  eternalize their fathers and mothers, brothers and sisters, through this historical memorial. We owe this to those who paid for our freedom with their blood.

So, all the Ostrowiec compatriots are called forth, those for whom our Ostorwiec martyrs are holy and dear, to be partners in this task of carrying out this noble and worthy project of putting up a memorial through which the names of our dear and beloved ones will be eternalized.