Below are translations of various segments of the newspaper

The Ostrowcer Rebi is for the Jewish State

Much sensation was called forth among the hundreds of Jews who attended the shabes tshuve droshe given by the local Rov, when the Rov expressed, among other things, that the planned Jewish state is a beam of light for the Jewish people.  Indeed, not a sun shine but just a moon shine.  The Rov then cited the mishne from Yoma where it is said, “One time the light that appeared was the light of the moon and they assumed that dawn had broken…”

The Jewish Community in a new location

We have been informed that the kehile has leased a handsome space for the community office on Glogowski Street.  The kehile will move to the new location on the first of November. 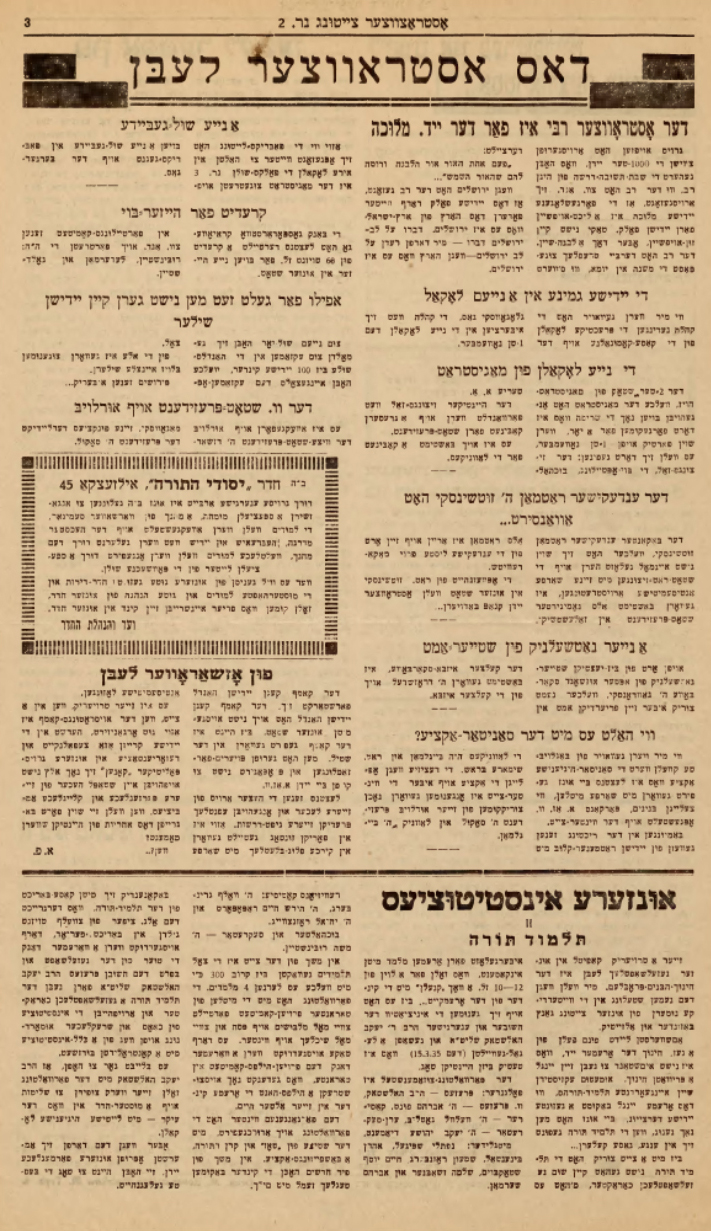 The new location for City Hall

The second story of City Hall building, on which the magistrate began construction after the fire that happened there last year, will be ready on the first of November.  Offices to be found there will be the meeting hall, the construction department, bookkeeping, and so on.

The current meeting hall will be remodeled for a larger office for the town president.

There will also be an office designated for the aldermen.

The well-known Endek Councilman Zutshinski, who more than once has been allowed to introduce his sharply antisemetic views in town council meetings, has been designated as a nominee for state president.  His place as Endek representative in the town council will be filled by Mme. Sakarewitsh/Rakarewitsh.

[* Endek is the National Democratic party of Poland.  Transl.]

A new chief for the tax office

In the place of the current tax chief of the office for fiscal _________ Mr. Navranski, who will move back to his previous office in the Keltz, Mr. Drozshrel, also of the Keltz fiscal __________, has been designated.

What about the sanitation campaign?

As we were informed by credible sources, the sanitary-hygienic campaign that was recently conducted for us with sharp methods like razing buildings, fences etc., has been stopped until winter-time.  Attempts in that direction were made by the Jewish Councilmen’s Club and Aldermen Beyglman and Councilmember Shimara Brash.  The decision about delaying the operation over the winter was made after their return from the vacations of President H. Sokul and Alderman Beyglman.

Since the manufacturing management has further declined to keep the Folks-shul No. 3 in their venue, the magistrate has undertaken to construct a new school building in the Pandiks area on Berger Street.

Credit for house construction b

The bank Gaspararstvo Krayovega recently announced a credit of 66 thousand zlotych for building new houses in our town.

There are two others on the distribution committee, the Messrs. Rubinshteyn, Leverson and Goldshteyn.

Even for money they will not accept any Jewish pupils

For the new school year it was announced that the business school will examine 100 Jewish children who have paid in the examination fee.

Of those examined only a few students were accepted.

The town’s vice-president on vacation

The town’s vice president Mr. Rusharsanovski is on vacation.  His functions are being taken care of by the president, Mr. Sokul.

Whoever wants to partake of our good healthy kheyder rooms and the masterful studies and the good management of our kheyder should come early to enroll his child in our kheyder.

Board and Administration of the kheyder

More recently the haters are out of their holes and have begun to openly preach their poison sermons.  So it was that last Sunday leaflets were distributed in the churches with sharp antisemitic slogans.

It is very sad that in a time when the fight for extermination is so well organized that Jewish groups are dominated by such dilapidation and disorientation and our big politicians “know” yet cannot raise one step higher than their own personal and small-time ambitions.  When will they, in spite of everything, comprehend the responsibility the difficult moment of today?