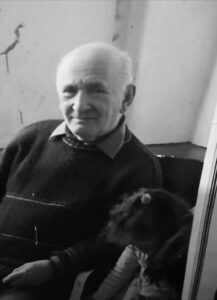 Written by Adriana Lerman, friend of Laura Groisman, the daughter of Rachmil Groisman

Rachmil Groisman was born on October 5, 1923, in Ostrowiec, Poland.  He was born into a religious Jewish family composed of his mother Cima Rosenweij, his father Tobías Groisman, and his brothers Lipa and Mendel.

His father Tobías worked in Ostrowiec as a carpenter. Despite being a victim of anti-Semitism, he saved his money to buy a ticket to Argentina.  Tobías settled in Buenos Aires where he worked hard as a carpenter.  He managed to send enough money to his family in Ostrowiec for four tickets, for his wife and three children.  His family arrived in Argentina in 1936.

Cima’s mother and sister stayed behind in Ostrowiec.  They were murdered during the Holocaust in the Treblinka concentration camp.

In Argentina, Tobías and Cima had a daughter named Aida.

Rachmil, Tobías's eldest son, married Lucia Milmanas, a Lithuanian Jew, with whom he had three children: Jose, Eduardo and Laura.

Rachmil worked in the leather goods industry.  He gave his children a Jewish education.