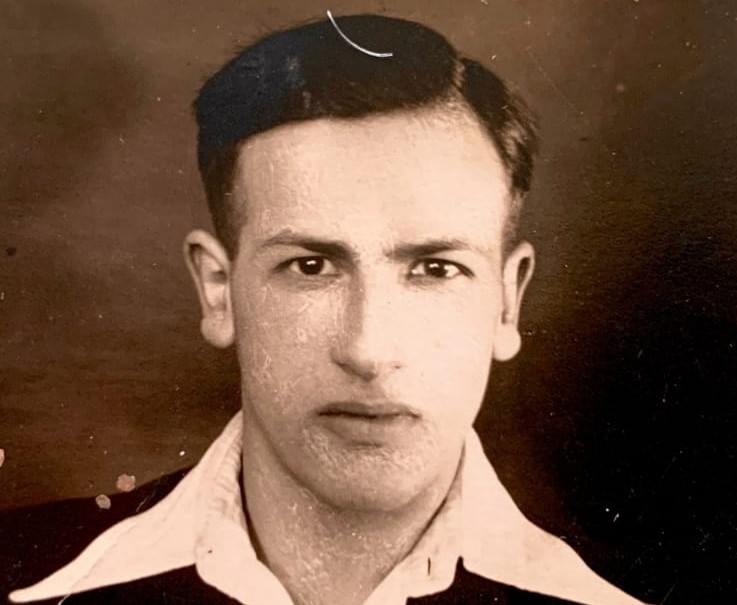 Aharon and Abraham Friedental survived the Holocaust years and moved to Israel after the war. Part of their story can be found here.

Father and son were both very involved in activities relating to the Ostrowiec survivors in Poland and in Israel.

A translated account of Abraham’s testimony as printed in the Yizkor book follows:

Israel Aharon Friedental was born in 1904 in the city of Lipsk, Poland. Already in his childhood he excelled with his sharp thinking and rare talents. At the age of 18, he was ordained a rabbi by Rabbi Chaim Ozer Grodzenski zt”l, with whom he studied in his youth. Among his teachers in Ekaterinoslav, Russia, was also the poet Haim Bialik, from whom he received his Zionist education, to whom he remained loyal all his life. The prodigy also acquired a broad general education and was a treasure trove of knowledge in the field of Judaism and general studies.

Rabbi Shmuel Gringlas, who was one of the dignitaries of the city of Ostrowiec, greatly valued Israel Aharon as a rare man and took him as a groom for his daughter. He was very proud of this son-in-law and often said: "If I was punished from heaven that only daughters would be born to me, then I received compensation for being rich and able to get a groom for my daughter like Israel Aharon." He added that no man can choose his sons for himself, while his sons-in-law can be chosen according to the degree of his ability and understanding ...

His activity in the Zionist movement

He headed the Revisionist movement in Ostrowiec. He did a lot to spread the idea of ​​Zionism in an environment that was still far from the Zionist idea. He shaped the character of a diligent public activist loyal to the needs of the community. He had the knowledge of the secret of conversation, spiced with witty sayings and sparkling ideas. Thanks to the kindness of his demeanor, he acquired many souls for the revisionist movement in the city. He was also accepted by his opponents in the Zionist movement, and he served as chairman of the Zionist Federation in the city.

In view of the great distress that prevailed in the city during the war, and in the house of the late Great Rabbi Meir Yechiel Halstock, Israel Aharon Friedental (who served as accountant at Prince Ponitowski's flour station) supported the Rabbi and other needy people by delivering bread and flour to their homes. In this act, he received much help from his wife Feiga nee Gringlas, who stood by his side for all his public acts. During the Holocaust, this generous family was destroyed and all of the family members, only he and one son survived; his wife, son and daughter, his parents and his brother-in-law the Rabbi of Lipsk and his family, and others, found their death in the Holocaust. He never recovered from this terrible tragedy, and bore the pain in his heart until the day of his death.  He never revealed it to the masses, and preached a renunciation of memories of the past, so that the people of Israel might rebuild their home.

The people of Ostrowiec, who mourned all that was dear to them, turned to him, hoping to hear from him a word of consolation for their great tragedy. He always had a sympathetic ear and to the best of his ability reached out a helping and supportive hand to anyone who needed it.

After the Holocaust, when the remnants of Ostrowiec’s Jews returned from the extermination camps and concentration camps, they began to gather in Ostrowiec, finding neither their loved ones left there nor shelter.  He organized an organization to help this unhappy community and provide housing relief and meet their first needs. He made the first contacts with people from Ostrowiec in Israel and in the Diaspora and harnessed them for relief work for the DPs in the city. At the same time, he resumed his Zionist activities in the city and in the district. He gathered young men and women and opened two kibbutzim, where they prepared themselves for immigration to Eretz Israel.

After disturbances broke out against the Jews of Kielce, he feared that this evidence would fall into the hands of the Poles, who feared revelations about their part in the extermination of the Jews during the Nazi occupation.  He handed over all the materials to a city-dweller, Motel Zickerfein, who left Poland, on condition that all the material would be submitted to the Jews of Ostrowiec organization that was to be established in Israel.

In the Kielce riots, the Poles intended to destroy the remaining survivors, thus completing the work of the Nazis. Israel Aharon Friedental turned to the Zionist institutions that were then established in Warsaw, and thanks to this, Soviet soldiers in uniform were sent to Kielce, who at the last minute prevented the certain extermination of the remaining of the Jews. Among the survivors were also members of the two kibbutzim which were established by him.

After the Kielce events, there was great tumult among the returning community, who had previously hoped to rebuild their lives on the ruins of the city. Israel Aharon Friedental began preaching to leave the Valley of Killing and immigrate to Israel. At the Joint and the Zionist movement, he obtained the necessary assistance to enable those who wished to do so to immigrate to Israel. Those who did not want to immigrate were transferred to other cities, where centers of Holocaust survivors were established.

Israel Aharon moved to Warsaw, where he enlisted in the aliyah and escape operations. He was chairman of the Ichud Party, worked in an escape institution, and was arrested several times and imprisoned for this activity. After authorities banned Zionist activity, he was not allowed to immigrate to Israel. He was forced to remain there until 1951 and during that time served as secretary of the Jewish Congregation in Poland. In this role, he worked hard to save Jewish children, who were handed over to Polish families during the Holocaust, and in one case even paid a sum of money to extricate a Jewish boy from the Poles that “adopted” him.

He also worked to rescue Torah scrolls and Jewish books and sent them to Israel. In 1951, he immigrated to Israel. He was one of the organizers of Mifal Hapayis , was once of its senior employees and contributed to the newspaper "Letzteh Nias", the latest news. At an advanced age, he enrolled in the Faculty of Law at Tel Aviv University and completed his law studies as an outstanding student. In 1964, he was licensed to practice law as a lawyer, and to appear before Rabbinical courts. In 1967, he received the Medal of Merit for his Zionist activities and for being a "Prisoner of Zion.”

In addition to being an activist and a public figure, he was an interesting man, with an original way of thinking, a sensitive conscience, true to his principles, was boundlessly thirsty and diligent and one of few individuals of virtue.

He died on the 21st of Adar 5735 in the middle of his work on the composition "Laws and Judgements of a Hebrew Source." He was 65 years old. His sudden death fell like a heavy blow to his family, his many friends and loved ones.

Links to other activities of Aharon Friedental: