Excerpted from The Rise and Destruction of a Family by Moshe Zaltzman, Yizkor Book of Ostrowiec, Editor: Gershon Silberberg, Meir Shimon Geshuri, 1971

The majority of Polish Jews, with their respectful, decent lives and sacred death did not shame humanity … A traditional Jew, somewhat modern, with a neatly trimmed beard, careful with the immaculateness of his clothing, as with his external appearance. Sometimes, his short, so-called European clothing served only for his business trips. On some of those trips, he would also try and catch some time with the Rebbe of Ger. With time, when his children would begin their studies in the gymnasium [secondary education], not without their parents' consent, Hersh stopped going to see the Rebbe, in order not to become conflicted with himself, and mainly, [not to become] hypocritical. He used his Jewish attire from then on only on Shabbat and on the Jewish holidays and at family events.

Hersh Kleinman was not a squanderer; he did not spend his money frivolously … He worked very hard for the money he owned, with a lot of strength and hard labor, and had to provide for his four young children, for their education. But Hersh never forgot about the needy people, about the “help the brother of your people.” Whenever he would meet me in the street or at home, after asking about his parents, about my mother – his aunt, and about the children of his sister Chana’le who died young, he never forgot to give me a valuable coin:

“Here Moshe, give this to them, to the children.”

This was done at every opportunity, in addition to the permanent help that he himself used to send or bring each month.

His brother-in-law, the Rosh Yeshiva [dean/head of the yeshiva] Reb Matisyahu Weitzman, may his blood be avenged, used to say about him:

“Hersh is a refined young man.” He would then immediately add: “But his house and even he himself are too fancy …” That meant, that in issues of God and man, he was not particularly careful… Understandably, the idea of the Rosh Yeshiva, who was totally stripped of the materialism [of this world], was that his brother-in-law was insufficiently religiously guarded – too much into worldly materialism… with his shaven beard, the above-mentioned shorter clothing [frock/coat]. Perhaps, those who stood too close inside the house and asked for help, also seemed too fancy through the eyes of the extremely devout brother-in-law.

Truthfully, Hersh Kleinman was [a person] of great detail. He certainly never missed mincha or maariv prayers [for evening and nighttime], let alone other, more profound mitzvos. But in his potential, he was already the new, more modern Jew, with great tolerance, and mainly – he already understood then what other pious Jews, chassidim, and those active in good deeds only began to understand with difficulty before the destruction [of the war]. Perhaps he did not recognize [the advancing of] the physical destruction of our nation; but he understood and openly accepted that without having control in our own country, we would not be able to maintain our own place, our own Jewish face as a nation. He actually belonged to the traditional part within Zionism – “Mizrachi.” But for his brother-in-law, and for his father, the religious Jew and Ger chassid, Noach Kleinman, this was a little too much:

“What does this mean?” they asked. “Are you really going to speed up the coming of Messiah with this? And with whose energy… with the energy of Hertzl? [referring to Theodore Hertzl, known as “the father of the State of Israel”]…

Other than being an active and respectable businessman, Hersh Kleinman was also a scholar [book lover]. He never studied in any yeshiva, and therefore he left home at the age of twelve and came to our uncle, a well-known bookseller and publisher in the Jewish world, Simcha Feder in Lublin. He himself, Simcha Feder, was a Torah scholar and devout Jew with a world-wide known name, and he implanted good character traits into this young boy, as well as a rare refinement. Hersh worked in his uncle’s store until his marriage to the wonderful girl, Sarah Meisels. After the wedding, they opened a small book store in Ostrowiec. Thanks to their diligent work with high business standards, the Kleinmans, after a few years, understandably attained a higher level, and with time, they grew the business, and built a two-storey house on Kosczielny Street. That house is still standing, to this very day.

It is time to dedicate a few words to the other half of the family. The wife Sarah or “Soro’le,” as she was warmly called, Sarah Kleinman Meisels, came from an old Jewish lineage, from the Meisels. Her great-grandfather, Harav Reb Dov Ber Meisels, was the Rav [chief rabbi] and leader of the real Jewish city of Krakow, and later, of the Polish crowning city of Warsaw, and was also a revolutionary and great Polish patriot. The famous Polish patriot (Lubomirski?) said: “The Rav brought to our regions the spirit of the Maccabees…” Her father, Yosel Kowkes, belonged to the most refined Jews of Staszow, with a good reputation in the entire area. Her mother – came from the Halberstams and Eigers [prominent names in the Jewish scholarly world]. Sarah’s brothers: Leibish, Itche, Chaim, and Pinye, all prominent Torah scholars with great reputations – with the Poles as well. Not one single decree was carried out as a result of their efforts. A particular thanks to Leibish, who not only was an activist, but an advocate as well. Today, her sisters: Dobra, Freide, and she herself, Sarah – an example of Jewish pride and modesty. 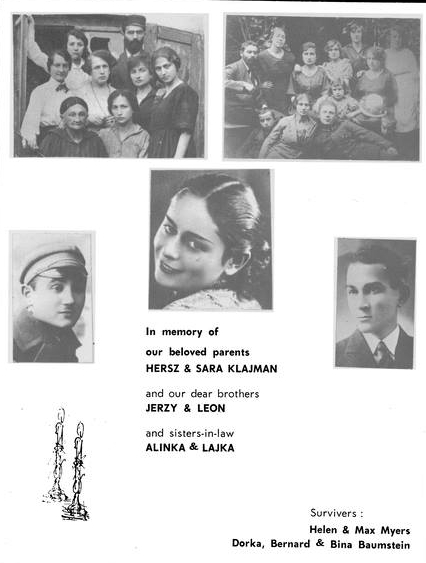 From the Memorial section of the Yizkor book