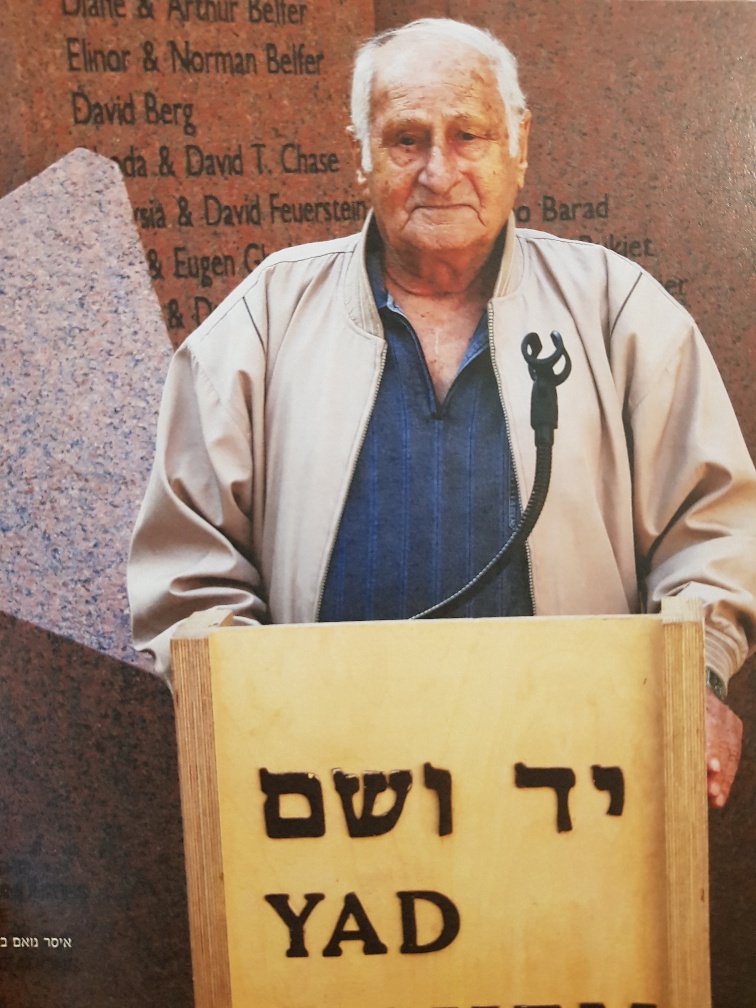 Excerpt from the funeral eulogy by Gadi Rozmarin, Isser's son

Dear Isser, today I stand before you, full of pride and appreciation, not with words of eulogy, but only with the words of praise, my dear and beloved Father.

We met for the first time when I was 14, and since then you have amazed me every year again, both in your mind and your abilities to finish things, and to make things come full circle- you didn’t leave things to chance.

You were a man of action - a man made of steel with a heart soft as butter.

I will begin with the story of World War II, the war on the Nazis, The Ghettos, the Partisans, the war of survival.

Just the tip of the iceberg of this crazy impossible war, I realized as I sat with you with a tape recorder for hundreds of hours, to tell the story that changed to the story of your life, the story of the war on Nazis, the daily war of existence, the war on life. I heard stories that sounded rather far-fetched and untrue.

Like the story of Maytek, your friend in the labor camp, whose body was burned entirely when a tank of oil and tar spilled on him and you and your friends hid him in the labor camp, and took his place at work.  Together you bribed the Ukrainian guards to bring you drugs and penicillin and during the course of over a year, hid him in the camp, nursing and sustaining him while he healed.

I’ll admit that the story sounds so delusional that before I wrote it in your book I had to confirm that it was authentic. Indeed, I found out that Maytek wrote a book, and a whole chapter of that book was dedicated to the story of Isser the hero who saved him from certain death.

There's a sequel to this story- about a year ago, Isser asked me to find the book that Maytek wrote.  At that time, I was unable to locate the family and the book.

Later, as part of my work in writing biographies, I met with a family in Nes Ziona who wanted to document their memories.  During the course of conversation, they revealed that they knew Maytek from Gedera, who was no longer alive, but they knew that his son was still working in the family laundromat in Gedera.  I got the son’s number and, on my way back to Tel Aviv, I called him.  The continuation of the story confirmed the stories and miracles that Isser told me.  Maytek’s son said, “Two days ago I got a call that someone found a book in the library of the Savidor train station.  In the book was a handwritten dedication, that could be of possible value to that person.  Needless to say, the book was the one that Maytek had dedicated to Isser, thanking for him saving his life.   In an exciting meeting with Maytek’s son and daughter, the book was returned to Isser.

After the war, Isser immigrated to Israel on the Ma'apilim ship "Theodor Herzl", which was captured by the British.  He was sent to Cyprus for three years. To this day I do not understand how an enlightened country like England would send 52,000 Holocaust survivors, who survived the extermination camps, to prison in quarantine camps.  Here, too, Isser revealed his full generosity and worked smuggling many of the camp's people to Israel. At the camp, he met Bronka, Baruch's mother, and later they married.  Isser’s struggles continued when Bronka became ill with severe kidney disease.  He devotedly cared for her and fought the disease for ten years until the day of her sad demise.

It seems that after so many years, when the whole world fought against him, Isser finally reached quiet and tranquility.  It was during those years that he met my mother, and rebuilt a family. He sent Baruch to study medicine in Italy to become one of the best surgeons in Israel.  Isser took care of Drorit and me as if we were his biological children.  He established a successful business.  It finally became apparent, this man was recovering from his past blows. And then, out of the blue, lightning struck him for the fourth time – his business collapsed, he was left with nothing.  Once again, he faced two decades pain and fear of the unknown.

But no!!! This man could not be broken or subdued! This man was made of unfamiliar; it seemed that no one could overpower him! And then again, out of the abyss, he managed to collect the pieces, and he drew power from an unknown source.  He built everything from the beginning, saved penny after penny, and reached the point where he could take care of himself and my mother.  He acquired a luxurious apartment, lived with dignity without relying on anyone, and everything with his two hands.  He was able to look himself in the eye and laugh, “I won! I won!!!”  It isn’t a wonder that such a strong and beautiful man was the object of my admiration.

A man of action I said- I'll mention only one of the projects that Isser took upon himself.  He was most proud of the memorial project about his town and his landsmen who perished in the Holocaust.

For two years, you enrolled and registered with "Yad Vashem" representatives the names of men, women and children from your community, innocent and pure people, who perished in the Holocaust by the Nazi regime. You remembered and registered 1630 names of family, friends and neighbors, who were raised from the abyss of oblivion and recorded them as "Witness Testimony".  Because of you, they are documented eternally and will never be forgotten.

Similarly, you commemorated your hometown and its people with monuments in Kiryat Shaul, the mountains of Jerusalem, and at Yad Vashem. The unveiling of the memorial, and the memorial plaque in the Cave of Remembrance, at the ceremony, attended by "Yad Vashem" people and the handful of survivors from your hometown, was the crowning glory of your life’s work to commemorate your hometown. You have no idea the feeling of pride I felt during the exciting ceremony, pride in that, you, a huge man –gave me the ability to touch you, to know that you belonged to me, or maybe that I belonged to you.  In any case, I thank God I was able to live with you.

Only at the age of 98, my elder – a strong man and hard as a rock –  you allowed yourself to let go, apparently the longing for my mother overwhelmed you. Now, let go, rest- you have lived your life, a difficult journey that me nor any other human being can begin to understand how you survived it.

Isser, today, when you are around surrounded by your loving family, your sons, your grandchildren  and your seven beautiful and amazing great grandchildren who love you –  friends you've amassed during your life, members of the Border Patrol crew who are so fond of you and you were so proud of your special relationship with them  – Today, even though you are a big, strong man, allow yourself to rest, wrapped in their tremendous hug as you travel down your last road.

And now I have one last small mission for you: send my mother warm regards, give her a kiss and hug from all of us.

May your memory be blessed!!!