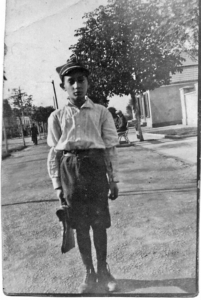 Excerpted from Leon's testimony and shared by his daughter Dr. Myrna Herzog:

Leon Herzog (Layzor Mayer Herzcyk) was born on January 23, 1919 in the city of Ostrowiec Świętokrzyski.

His family was well known in Ostrowiec: his father Jacob (Yankele) had  a small factory of potato glue, and his mother Rachel had a store, she made hats. Leon was the youngest of 9 brothers. The two older brothers, Bernardo (Berl) and José, emigrated to Brazil in the early 1920s, and two sisters (Rivka and Tsila) followed them on the eve of the second war. His brother Saul (Shaul) had a small bicycle factory (partly manufacturing and partly assembling bicycles) - where Leon had worked since he was a boy.

Leon studied at a public school, and when he finished Elementary school, he entered a Technical school, motivated by the bicycle factory.  With the marriage of his brother Saul, who went to establish himself  in another city, Leon was forced, at the age of 16, to take over the business.  At 17-18 years old, he already directed a small factory. 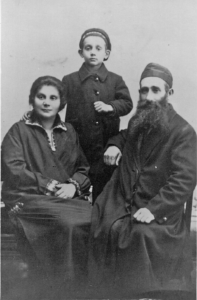 Leon with his parents Jacob and Rachel Herzcyk/Herzog

Leon with his brother Saul 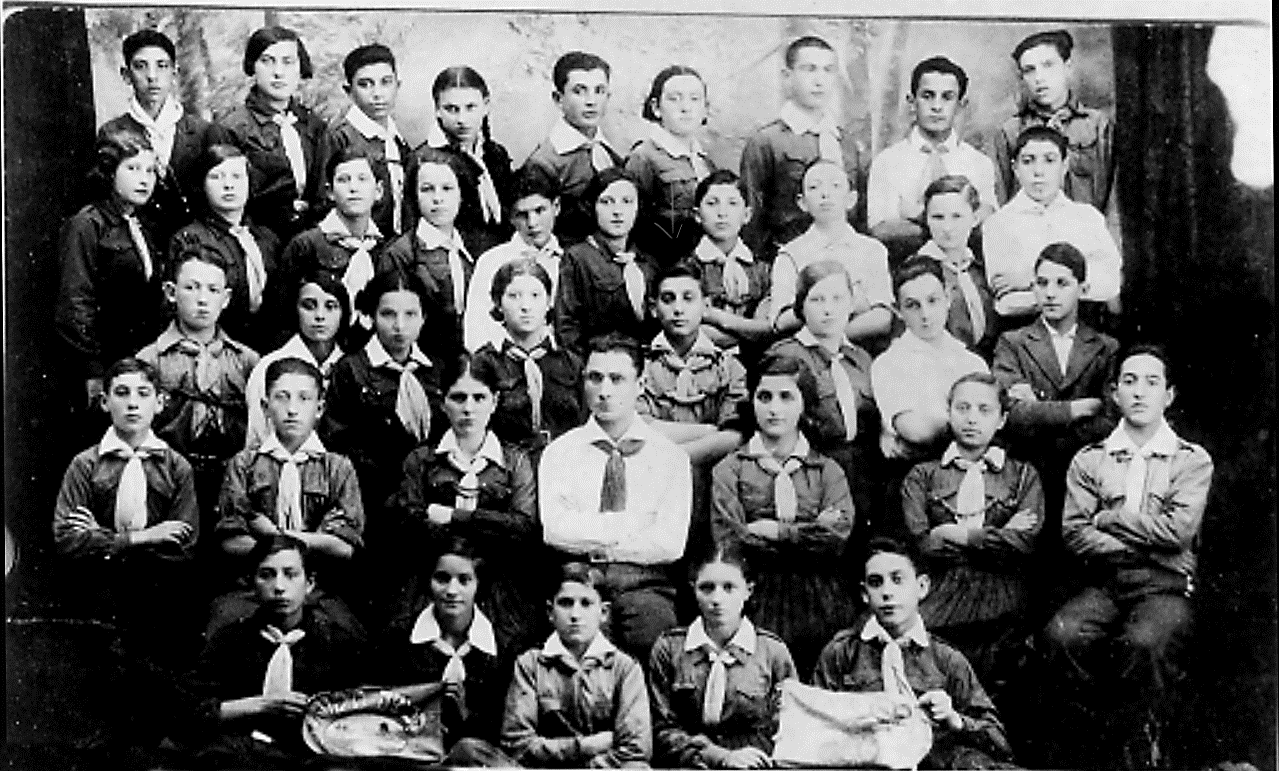 Because of the bicycle factory, Leon was known in the city hall, where these new documents were issued. He managed to get an official who knew him, to produce fake legitimate documents, using real photos of himself and a small group of friends from the Zionist movement, giving them the identities of non-Jewish Poles. Thanks to this, Leon and all his friends were saved: "We did not lower our heads."

The Germans entered the city on September 7, 1939 and progressively took everything. At first the bicycle factory was still functioning. Leon says that during this period, a young Polish woman who had bought and taken a bicycle, returned a few days later complaining about the price she had paid. He explained to her that she had bought this bicycle from Germany for that price and showed her the invoice. “She didn't like it. She went to file a complaint at the Gestapo saying that I spoke ill of Hitler. Gestapo came to arrest me, they took me and they wanted me to sign a statement saying that I had said this and that about Hitler. I refused, I was arrested, got a good beating, and my parents managed to get me released, with money,  through the Judenrat (Jewish Committee)".

Like other Jews, Leon was forced to work as a slave in German factories, at first in a steel mill and then in a brick, ceramic factory. "The Germans took us, during the day we marched in line a few kilometers, to work, and after work we went back to the ghetto to sleep. In the morning, during the day, we received a soup, a piece of bread."

In the spring of 1941, a ghetto was established in Ostrowiec. One of the most striking visions for Leon was when one day, marching to work, crossing the main ghetto square (formerly Jewish), he saw houses with broken windows, doors wide open, looted, without a soul, and books, entire libraries, prayer books, chandeliers and traditional Jewish objects, all thrown in the middle of the street. He thought: "the end has come, no Jew will survive".

There had been a first deportation, and there was news that there would be others. A group of Jews had tried to join the Polish partisans, being summarily executed, as soon as they deposited the weapons they had brought - which made this option impossible. What to do?

The Germans recruited Poles to work in Germany in various areas with some remuneration. Leon and his friends, in possession of Polish non-Jewish identity cards, managed to enroll as volunteer workers and travel as Poles to work in Germany in early 1942. He stayed there until the end of the war, in Gissen, working as gardener in a vegetable plantation, where he also worked as a mechanic, driver and builder.

Leon survived the bombing of the city by the Allies, and after the war, he went to work for some time as an officer in the U.N.R.R.A. (United Nations Relief and Rehabilitation Administration), the body responsible for repatriating the foreigners spread across Germany to their countries of origin. After numerous unsuccessful attempts, he managed to communicate with family members in Brazil, and finally got documents to emigrate to Brazil - which he did via Paris and Genoa, on a cargo ship adapted for passengers, Alm. Alexandrino. He arrived on December 10, 1946, a date celebrated annually with great enthusiasm. He found Brazil a paradise.

Below is a poem by Leon’s daughter Myrna Herzog, written after her visit to Ostrowiec:

Today we finally were
at your home.

We saw the little white flowers
the cherry tree
and the garden gate
which led to your home.

The house itself
is now divided,
its territory claimed
by two or three shops.

But your garden remains
untouched
abandoned
forgotten in time.

You were suddenly with us,
Yaacov and Esther Ruchla,
in your home
in the blossoming garden
under the blue sky
in the heat of the sun.

We saw you coming out,
Grand-pa,
walking through the garden
with dignity
in your while talit --
arrested
refusing to leave home
shot in the head
dying among the stones.

At the sight of your cherry tree
we gathered and prayed
and put stones at your door.

Today,
66 years later
we finally said Kaddish for you. 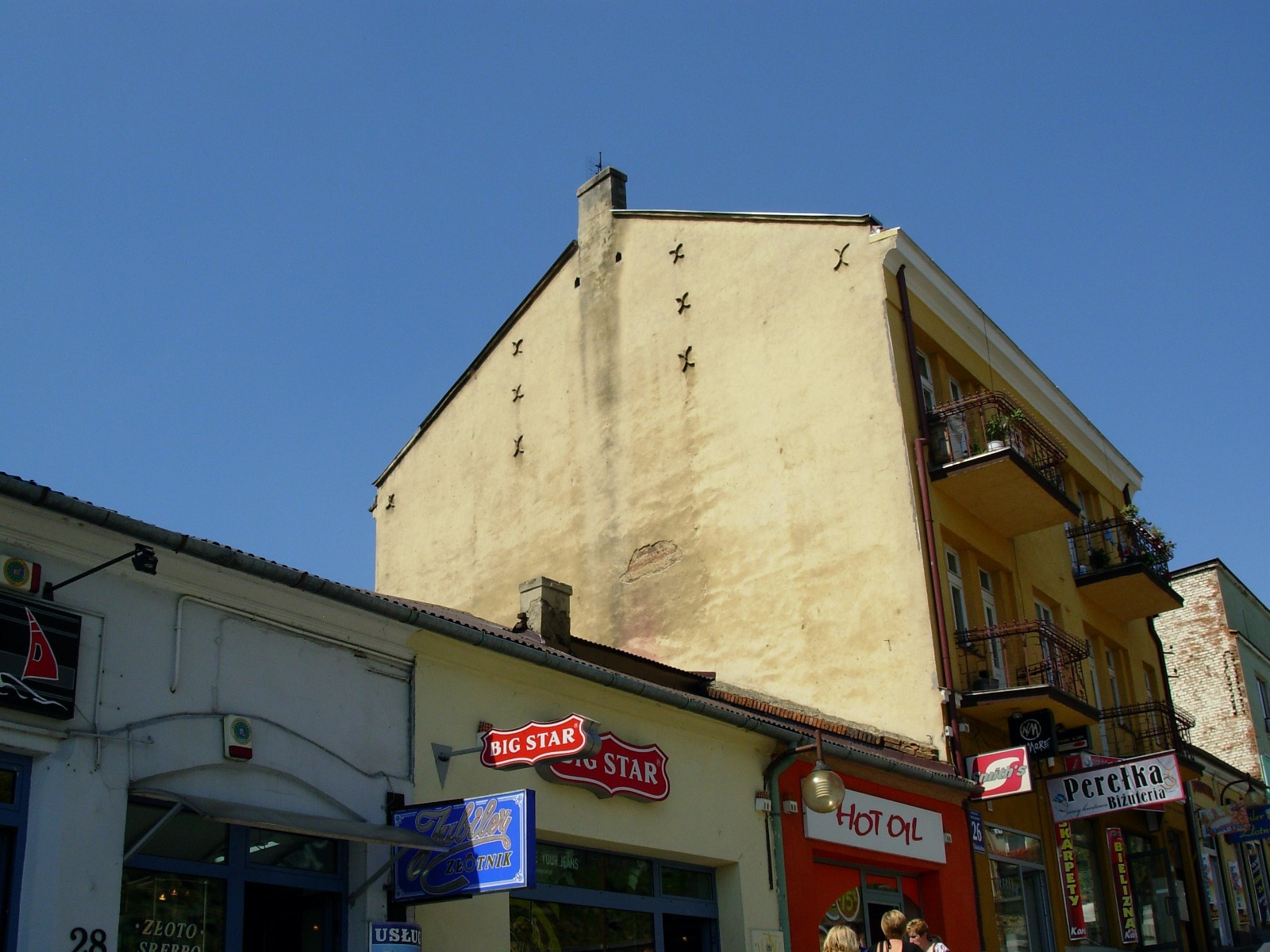 Photos of the front and back of the building at Kościelna 28, where the Herzog family lived before the war. 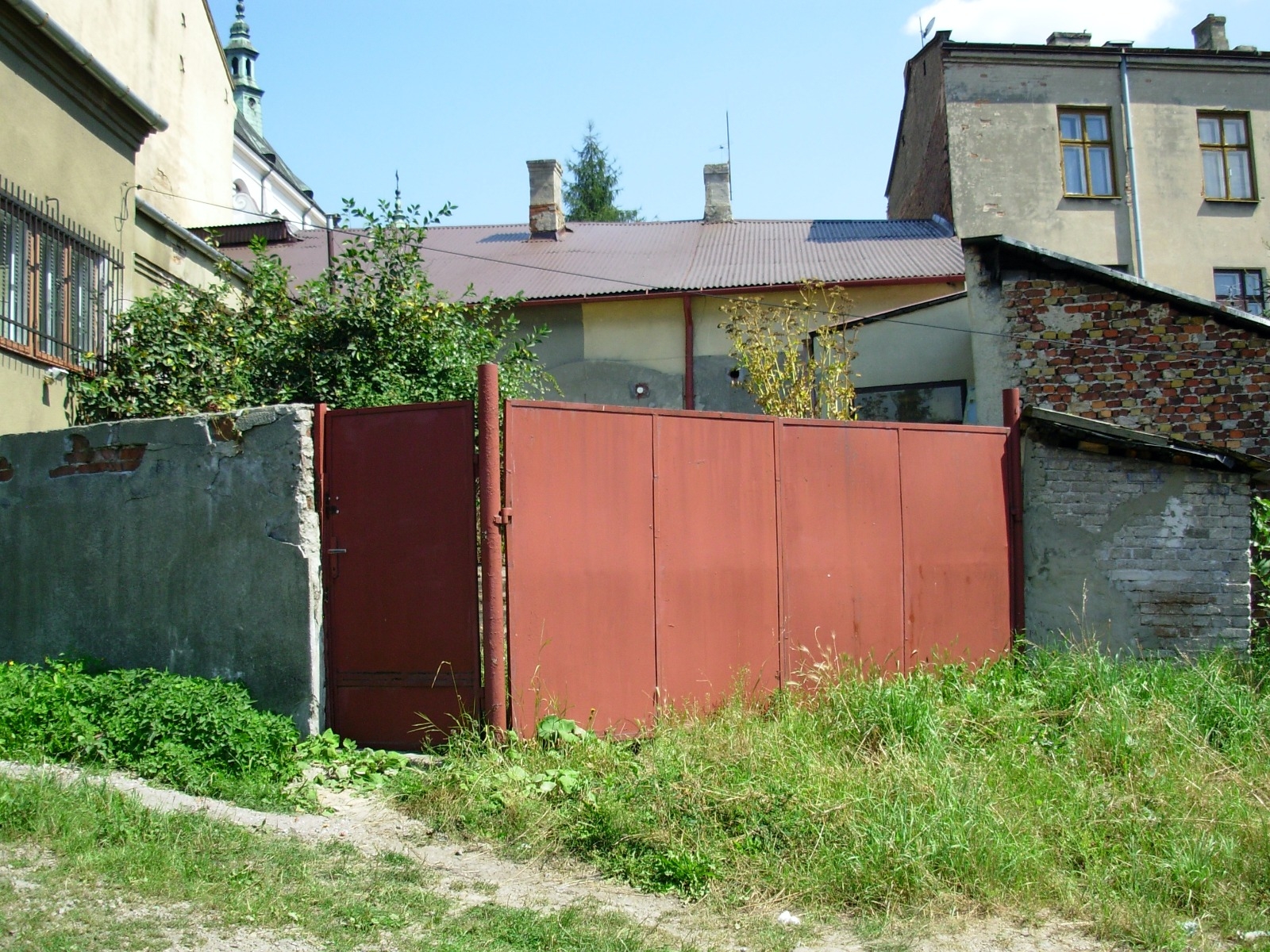