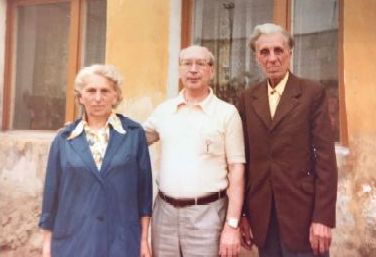 Abraham Efraim Fishel Fuks (born in Ostrowiec in 1899 to Moshe and Dvora) was a merchant and married to Shprintza nee Rubin. (His brother was Leiser/Eliezer Fuchs)

The  parents along with their 4 daughters under 18 were  deported and murdered in Treblinka :Fani (Faiga/Raizel-17), Chana (12), Chava Miriam (9) Chaya Baila (4)

Their 2 sons : Leo (Moshe) and Meir Fuks survived the war by being part of a group of Jews that were part of a plan  to escape to a nearby village of Chmielów and hide in a bunker with other . The bunker was arranged by  Tadeusz and Marianna Pastuszka.

Over 50 years after the war a hidden poem/ testimony written by Leo was revealed. The poem discusses  the  October 1942 liquidation of the Jewish Ghetto and community of Ostrowiec. He wrote it during the war and completed in the hideout with help of Aron Rappaport.