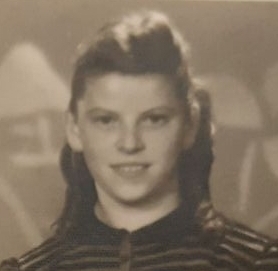 I was lying in bed, and could hear every word my parents talked. My bed was closest to the kitchen; they spoke quietly.  I heard and I got scared.  I tightened my blanket closer to my body… tightened my eyelids as I did many time later in life in time of stress.

It was 1940.  The Germans started with their decrees against the Jews.  My parents discussed what will happen if they separate us from them.  We were four children.  What could they do to give us a chance to buy bread.  They came up with an idea to give us jewelry.  Since my  father was a watchmaker and a jeweler, there was enough jewelry to give to each child.  They decided that chains could be easily sewn in things, earrings were made as buttons and sewn on.  I could not understand how rings could be made buttons, and I couldn’t understand that Germans were bad.  I remember that they came on bicycles, put them along the well of our backyard, came to the well and washed their faces, laughed and splashed water.  They were very friendly.  I didn’t like those that they marched with those boots that had nails.  And I did not like when they put posters with new laws that made my mother cry at night….