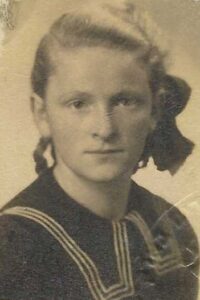 Nesia Nisenbaum-Borenstein was born in Ostrowiec, Poland on July 26, 1931 to  Szprinza Krieger-Nisenbaum and Moshe Nisenbaum. She was the youngest of her siblings: two sisters, Regina and Bronia, and brother Raphael.

Nesia was only 10 years old when the Ostrowiec Ghetto was established.  As a result, she was not able to attend public school.

During the liquidation of the Ostrowiec Ghetto on Oct 11, 1942, Nesia’s parents decided not to join the forced gathering of the Jews at the market square, and instead went into hiding in the town. Shortly thereafter, they were all caught; her father was shot dead on the spot.

In July 1944, at age 13, Nesia was deported to Auschwitz with part of her family. In January 1945, she was transferred to the Ravensbrueck and Malchow concentration camps in Germany. She was liberated in April 1945.

Miraculously, her mother and siblings all survived Auschwitz and were also liberated in 1945.

After the war, Nesia’s mother decided it would be best for her daughters to learn and be among teenage friends.  They lived in Bielsko at the Dom Dziecka school and orphanage. Nesia’s happiest childhood years was at this school, learning and interacting with friends her age. She lived there from 1945-1950.

In 1950, Nesia, her mother and sister left for Israel, where Nesia later became an infant nurse. After marrying Jack Borenstein, also from Ostrowiec, in June 1957, Nesia moved to Toronto, Canada later that year. Together they raised three boys.  Nesia passed away in February 1987.

NEVER FORGET US
by Nesia Borenstein

As a concentration camp survivor it is so hard
This sad story to start
But I feel we must
Never forget the past
Not forget our brothers, fathers, small children, and mothers
It is not easy to tell
Of the gas chambers' smell
I remember the smoke
Reaching the sky.

Surely G-d could hear
Their screaming, suffering,
And how they cried.
I didn't see faces
But was họping
The smoke will reach help in some places
I suffered and imagined how the crying died
And the innocent souls were saying to me
Please don't forget us
Goodbye, goodbye